Do you remember your student council president from your school years? No, probably not, right? They really weren’t very important and typically didn’t have a lot of power. However, student council presidents in anime are often more than just people that want something fancy to put on a college application. Sometimes they have crazy, world-ending powers. Perhaps the most famous of all powerful student council presidents, Satsuki rules her school with an iron fist. Thanks in no small part to her and the student council’s special uniforms, they can physically overwhelm any student. Furthermore,because her mother is the chairman of the school’s board of directors, she can even exert power over the principal and the faculty. 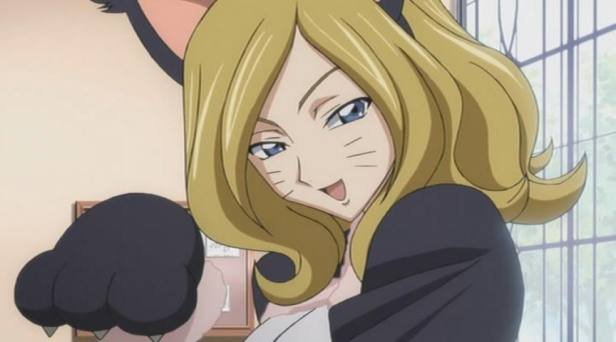 Well, Ashford academy was founded by the Ashford family, so their daughter was pretty much almost guaranteed a spot on the student council, right? However, as student council president, Milly doesn’t necessarily rule with malice, but more so uses her power to enact silliness. Crossdressing festivals and using one of the first mecha in order to make the world’s largest pizza is just a sample of her whims that are carried out.

The Big Four in Boys Over Flowers While The Big Four aren’t technically the student council in the series, they mind as well be. Their families are incredibly rich and have done a lot for the school. As such, The Big Four can essentially do as they please including bullying students and skipping classes. All Medaka wants to do is help, and she will take any action necessary. Trained in high level martial arts and more than capable of kicking multiple asses, Medaka gets the job done as the sole member of the student council. Furthermore, her sheer power seems to make her impervious to any action by authority figures when she is trying fulfill a request. Kanade is the student council president for most of the series, though briefly removed due to some shenanigans at one point. While she doesn’t exhibit any emotion, she does take pretty good care of the school. Furthermore, she is imbued with a huge amount of power capable of single handedly shutting down the rebel group that tries to undermined her.

Misaki From Class President is a Maid! Not all powerful student body presidents need have supernatural powers. Misaki is a force to be reckoned with purely due to her strength of will. Impressively, she was able to become student body president over a school that was very recently an all-boys school. Furthermore, she got everyone to fall in line and even lived a secret life outside of it to take care of her family. Nao is the student body present of a school specifically for those with unique powers. While her powers aren’t necessarily more powerful than others, her great leadership allows her to lead the school effectively. As president, she is allowed frequently leave from the campus in order to recruit new students with powers. Prison School technically has two student body presidents, one for the Aboveground and one for the Underground. Mari has dominion over the Underground Student Council where he job is punishing bad students. Of course, she also has to contend with the Aboveground Student Council trying to wrestle her authority away. She is unyielding and without mercy. Fuuka Academy is a school in which 13 girls have been admitted with the Hime mark that allows them to summon and fight with mechanical creatures called Childs. They are meant to use them to fight Orphans. With all thirteen at the school, it must be a pain to keep them all in line, lucky from student council president Shizuru, she is also a Hime. Kyoya prefers to be alone, but because he is President of the Disciplinary Committee, he has a group of thugs that follow him and do his bidding. He uses his power mostly to be left alone and is irritated when anyone disrupts that. Furthermore, he is not one to be messed with as he can kill and disappear a body as he pleases.

Do you know any more overpowered student council presidents in anime? Let fans know in the comments section below.