Last time, we took a look back at the Best Anime of 2014. Now, we are taking a look forward to what lies ahead in this new year with the 10 NEW anime we are looking forward to the most. These are only new anime, so meaning we cannot include returning anime such as Nisekoi, Oregairu, and Gintama, as well as spin-offs such as The Disappearance of Yuki Nagato-chan and Magical Girl Lyrical Nanoha Vivid.

Just like our Best Anime of 2014 list, we have thought long and hard on which ten anime to include, and after much deliberation, arguing, and violent reactions, here are our choices (Which are not ranked by the way): The story follows Souma Yukihara, a chef’s son who dreams of working in his father’s restaurant and aims to surpass his father’s culinary skills. However, just as he graduates from middle school, his father closes down their restaurant to cook in America. He then gets challenged by his father to go to an exclusive culinary school where only 10% of the students graduate.

Is It Wrong to Try to Pick Up Girls in a Dungeon? This fantasy light novel series by Fujino Oomori has gotten much acclaim, and has ranked high in 2014’s Kono Light Novel ga Sugoi! rankings at 4th place beating out Sword Art Online and OreImo. The anime will also be produced by JC Staff, which means that expectations for this one will indeed be quite high.

The story is set in a town called Orario, a.k.a. Dungeon, where adventurers make a living. It follows Bell who one day gets attacked by a Minotaur. He gets his life saved by a more experienced adventurer named Eyes Warenstein, and he immediately falls for her. However, things get complicated when the goddess Hestia falls for him. Produced by WIT Studio, which is best known for their success with Attack on Titan and Hoozuki no Reitetsu, Rolling Girls will be having some pretty big shoes to fill, however, it seems like the anime is in capable hands with Silver Spoon director Kotomi Deai at the helm. This will also be the very first original TV anime by the studio, which also raises the expectations a whole lot more. Based on the novel series by American writers, Bradley Bond and Philip Ninj@ Morzez, Ninja Slater From Animation is without a doubt one of the most anticipated anime this 2015. It will be animated by Trigger, best known for Kill la Kill, which just heightens the excitement.

Based in the cyberpunk city of Neo Saitama, this anime follows salaryman Kenji Fujikido who gets possessed by the spirit of a ninja, becoming Ninja Slayer. He then sets out for revenge on the ninjas for the death of his family who were caught in a turf war. 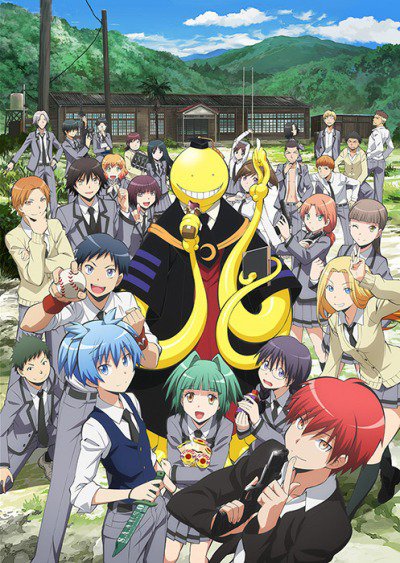 Lovingly called “AssClass” by many of its English-speaking fans, Assassination Classroom certainly has a whole lot of hype coming into 2015 as its original manga has won many awards and has already beaten the very best titles out there. Like Shokugeki no Souma, this anime is from the pages of Weekly Shounen Jump!, which has produced countless classics like One Piece, Naruto, Dragon Ball, and Bleach.

The series revolves around a class which was tasked to assassinate a mysterious octopus-like alien , Koro-sensei, who is responsible for destroying 70% of the moon. Expect plenty of thrills, action, and even more laughs with this one. Based on the yuri manga by Akiko Morishima, Yuri Kuma Arashi will be an “intellectual fantasy” anime which will be directed by Mawaru Penguindrum and Revolutionary Girl Utena director, Kunihiko Ikuhara.  The anime follows Kureha Tsubaki, a girl that is barely noticeable by others. However, every night, she dreams of her classmate Ginko Yurishiro as a bear. This upcoming romantic anime has plenty of potential to rise up the ranks of the high school romance genre in terms of popularity, just like Nisekoi and Maid-sama!, and that is why we are really excited in watching it.  The anime follows the “gentle giant”, Takeo Gouda, who lives in the shadow of his attractive best friend, Sunakawa. Because of his size and his looks, he is shunned by girls, however, things change when he saves a girl named Yamato from being harassed inside a train.

Yamada-kun and the Seven Witches Just like Shokugeki no Souma, Assassination Classroom, and Ninja Slayer, Yamada-kun also comes into 2015 with a lot of hype. Based on the highly successful manga series by Miki Yoshikawa, the series follows Ryu Yamada, a “violent” delinquent who somehow manages to switch bodies with the school’s smartest student, Urara Shiraishi. Things get a turn for the worse when they find out that Shiraishi is actually a “witch”, and she is not the only one as Yamada teams up with her to find out who the other six are. One of only two video game-based anime in our list, Gunslinger Stratos is certainly coming in with a lot of hype with none other that the infamous Gen “Urobutcher” Urobuchi writing the anime’s original scenario. Gun Slinger Stratos the Animation will be based on Square Enix’s popular Light Gun Shooter game which was first released to arcades back in 2012.

The anime is expected to have plenty of action as assassins and mercenaries from two different factions in the future go back in time to 2015 and try to eliminate one another in order to eliminate the other faction back in their own timeline. We saved the anime with the most hype for last in our list, and rightfully so, as Kantai Collection was without a doubt the most popular series in Japan and took the entire country by storm even before the anime adaptation was announced. By far, this anime is one of the biggest premieres in 2015, and rightfully so. However, with all that hype comes a whole lot of expectations. Let’s just hope this anime adaptation of the popular browser game lives up to them.