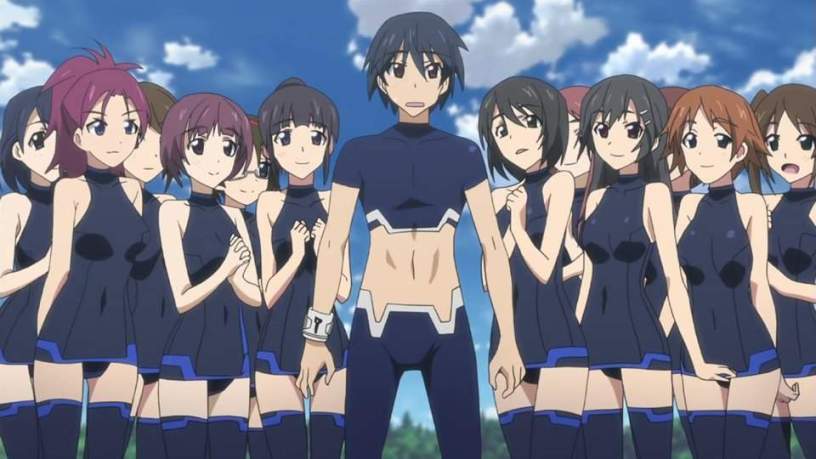 Ah, the ol’ rooster in the hen house. Nowhere is there an easier to work harem trope than having a singular man go to an all-girl’s school. Maybe it is recently co-ed, perhaps there is some other circumstance. Regardless, this bare bones plot gives creators free reign to create dozens of beautiful girls that are, I guess, just insanely thirsty?

In an effort to teach fancy rich girls more about the world outside their fancy rich bubble so they don’t end up completely shutting down after they graduate, this series basically kidnaps a common teen boy to serve as a sample of “commoners” outside. They are meant to ask him questions, but instead use him for all sorts of strange shenanigans. It ends up as a pretty good comedy series as it tries to be nothing else.

This series tells the story of mechs that can only be piloted by girls, and then suddenly a guy has the ability to pilot one. As such, he is sent to a training school where most of the series takes place. As far as this trope goes, Infinite Stratos manages to make a pretty good show out of this. Its emphasis on comedy rather than ecchi and it has a pretty interesting world to show off.

Otoboku: Maidens are Falling For Me

Contrary to the usual plot, Otoboku takes a male character, that, in order to fulfill his grandfather’s wish, attends an all-girls school. Of course, there are no boys allowed, so he dresses as a girl. The entire plot is as you would expect: him trying to avoid getting caught and getting himself into really awkward situations.

There isn’t a lot you can do differently with this set up, but Maria Holic dared to dream and did their best. This series tells the tale of a girl that wants to fall in love, but because she gets hives talking to boys, she goes to an all-girls school to try and catch herself a woman. She becomes enamored with one, but it turns out that it is actually a man dressed as a woman. While it sounds all very comedic, it is actually a really well written show.

Initially entering the school because it doesn’t have entrance exams and is recently co-ed, your standard perverted boy is shocked to discover that much more goes on here. Instead of being a standard harem anime, they added an air of action to the series with special items received by all students called Maken. It grants them special abilities, but the problem is that the main character has a problem finding a maken that works for him.

This is a show for the sadists. With the school recently co-ed, the girl students aren’t exactly pleased with the small invasion of male students and their proclivities. Unfortunately for the male students, they misbehaved and were sent underground where they are treated like prisoners.

This series operates under the idea that the girls of an all-girls school will be upset about going co-ed. As such, a small handful of boys are selected to test the waters, so to speak. So, boys are sent into a school full of hostile women. It focuses on just one guy really and it takes a visual novel sort of approach in defusing hostility.

Blade Dance of the Elementalers

In Blade Dance, females can form pacts with spirits to fight battles for them. However, the main character is the first male in 1,000 years to be able to form  a pact. Not only is he thrust into an all-girls school to train for an upcoming tournament, but it turns out the spirit he formed a pact with was stolen from another girl.

Just as dragons mysterious appeared in the world, so did the D’s – girls that can manipulate dark matter into weapons. For years, only girls were born as D’s until one day, a male manifested the power. Could he be the key into unraveling the mystery between D’s and Dragons?

Let’s be clear here: this show is trash, but it is the best kind of trash. However, if you are looking for an anime series about a boy at an all-girl’s school, you are probably looking for this sort of trash. Consider this show an excuse to draw girls in perverted situations with an emphasis not on trying to create any plot, but wedging in a lot of random comedy.

After their school became co-ed long ago, girls asked to carry weapons to protect themselves from the male menace. After generations of this, a special group formed to correct problematic male students. With the main character heading there after getting into a brawl, a bunch of girls are waiting to correct him.

Lux is a former prince and a dragon rider renowned for being the worst for not attacking. After he is challenged to a duel by the kingdom’s new princess, he ends up being sent to all all girl academy of dragon riders that are training to be dragon knights.

The Fruit of Grisaia

Of all these shows, this is the only one that tries to make itself a touching drama. It is all about a man attending a school that is specifically for women that have been traumatized by something. He learns their stories and tries to help them. It was based on a visual novel so it has that same visual novel multipath feel to it.

Do you have any more anime recommendations where a boy goes to an all-girls school? Let fans know in the comments section below.