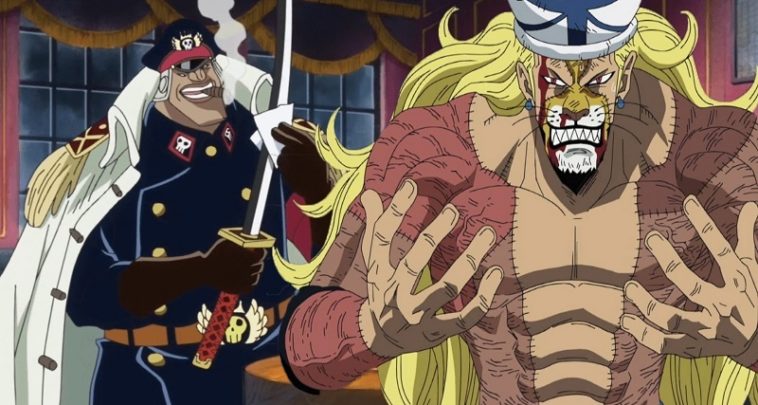 In Chapter 925 Gekko Moriah, Catarina Devon, Avalo Pizarro, and Marshall D. Teach are seen for the first time after the timeskip. It is also revealed that Shiliew of the Rain and Catarina Devon are devil fruit users. In New World on the Pirate Island – Beehive, Gekko Moriah and his zombies are raiding the island and demands for Blackbeard. He is there to find Absalom who landed at the island a few days ago. Avalo Pizarro is notified of Moriah’s attack by some underlings.

Suddenly Absalom shouts to Moriah that this island is a paradise and that he forgot to report back to Moriah. Moriah is relieved that Absalom is safe, and says that he was worried because the Blackbeard Pirates are known to be “Ability Hunters”. All of a sudden, he is sliced from behind by someone. It is revealed to be an invisible Shiliew and Moriah is surprised that he used Absalom’s powers.

Suddenly ‘Absalom’ starts laughing and it is revealed to be actually Catarina Devon who was disguised as Absalom using her Devil Fruit powers. A horrified Moriah asks her what they have done to Absalom and she replies that he is dead and his corpse is still with them and mockingly asks if Moriah wants it back.

So.. Shiliew of the Rain has eaten the Suke Suke no Mi, a Paramecia-class Devil Fruit which gives him the ability to turn himself and other things invisible. With this fruit, he is able to cut opponents without being spotted, taking them by surprise. Catarina Devon, known as the “Crescent Moon Hunter”, ate the Inu Inu no Mi, Model: Kyubi, a Mythical Zoan-type Devil Fruit that allows her to transform into a nine-tailed fox. With this power, she can transform into clones of people similar to the Mane Mane no Mi.