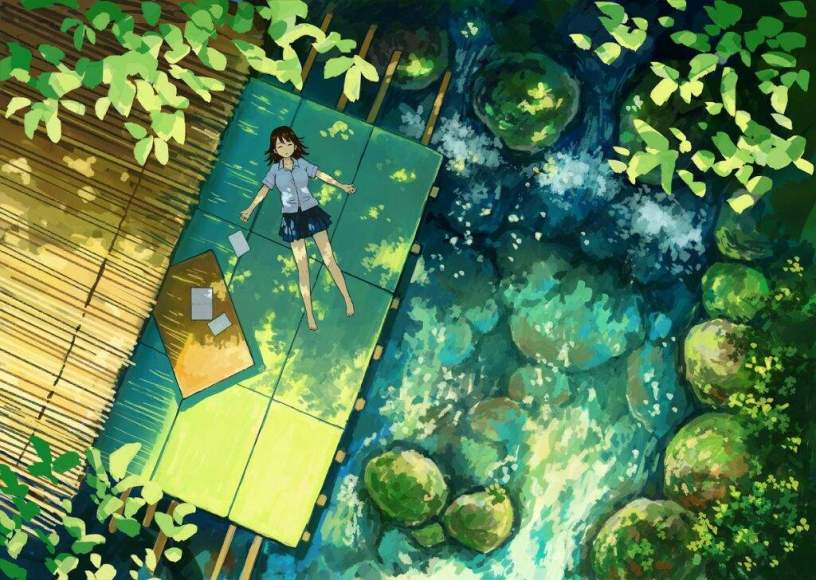 Anime doesn’t need to be all action and drama in every series. Sure, that is what makes it interesting for some, but sometimes you just want to watch something and set your brain to autopilot. The Japanese even have a special term for these sort of anime series, they call them Iyashikei, or healing shows. The shows are meant to have a soothing effect on the audience and highlight the small delights in life. If you are just looking to relax, these are some pretty good anime series to chill to.

The recipe is simple. Take a bad mannered city boy and send him to the country to cool off. As is the case when anyone new shows up in a small community, he is the center of attention, and therefore the target of all the shenanigans. Barakamon is all about learning to enjoy the little things in life and learning to say yes to even the most seemingly pointless adventures.

Isn’t it cute when animals pretend their people? Well, the animals in Shirokuma Café are indiscernible from actual people, but it is their little animal quirks that add an extra layer of interest. Otherwise, it is just a relaxing comedy about café life.

Like water, Tanaka’s goal in life is to take the path of least resistance. This is a show about trying to do as little as possible each day. The joke is that something trying to do so little is actually a lot of work.

This series is every bit the actual fun of camping without all the less fun parts. You get beautiful outdoor visuals and a detailed tour of camping food, but you aren’t out there freezing your butt off. It is a cozy show that you can be cozy while watching.

Amanchu is a show about scuba diving, but we both know it actually isn’t about scuba diving. While they go through some characters learning to scuba dive, you know from the first episode that this show is meant to show off beautiful underwater visuals rather than focus on the actual dive. Furthermore, its secondary theme of building friendships is pretty nice too.

Drinking to escape your problems? Why not watch an anime about making cocktails? While this isn’t about straight up alcoholism, it is about a bartender that can provide the perfect cocktail for every individual problem.

While you might be fooled into thinking that this show isn’t about anything, you’d be wrong. It is about building an unconventional family and blending with a community.  They might be dragons or all females, but they come together the same as any family. However, even if you care about exactly none of that, the dragon shenanigans make this show worth the watch.

There are a lot of shows about a human helping supernatural creatures, but none are like this. No matter what, this show stays chill. There really isn’t any kind of action, it is just mostly drama and some surprisingly heart-jerking moments. Sometimes it’s funny, sometimes it is sad, but all times it is soothing.

I feel like a lot of people can relate to a civil service job. It’s a lot of paper pushing and a lot of thankless work. However, Servant x Service makes it look almost fun. Of course, real work isn’t filled with this much entertainment, but this is very much a show about loving how weird the work world can be.

Take a few cute girls, put them in the country, and watch how they entertain themselves. This is the overall premise of Non Non Biyori, but this is hands down the most popular show to watch for those that want to relax. Not only does it have some beautiful visuals, but it is the type of show where you can hop in and out of it without being completely lost.

Oh, young love! Instead of being honest with your feelings they come out in ways like teasing. In this series, that teasing turns into a competition on who can tease the other better. It is endlessly cute, and just sometimes, a little frustrating.

There are quite a few anime series featuring child characters, but significantly less about toddlers. This show makes the case on why there needs to be more. It aims to swarm and overwhelm with cuteness without making the audience actually have to deal with young kids.

Meals are always better with friends. This is the whole theme of the show. It is very much a show about cooking and eating food, but has the main theme that those foods will always taste better when you eat them with good friends.

There is something so refreshing about hard work sometimes. When you follow a young girl that feels like she has to work hard to earn her spot and her grandmother’s love at a country inn, it kind of leaves you feeling pumped up. While there is a bit of drama in this show, overall, its country visuals and wholesome story can put a smile back on your face.

There aren’t many anime about parenthood or the unique joys (and troubles) that come with it. However, Usagi Drop is really all you need. Although he is not her blood-related father, the main character rises up to that fatherly role, though not without his fair share of bumps in the road.

The major benefit in crafting a series about an inn for supernatural creatures is that you are not bound by reality. If you want to create a tranquil atmosphere, you can do whatever you have to do in order to do it. That’s what happened here. Unlike other shows about inns, like Hanasaku Iroha, there is no real drama here, but rather just the staff that are ready to serve their variety of extra-unique clientele.

Despite being about witches, these witches aren’t throwing flashy spells around. Instead, these are more nature-oriented witches which is why the main character moves to the country. Furthermore, the witchcraft is mixed with plenty of normal human shenanigans.

Farming is hard work, but it doesn’t need to be all seriousness. Silver Spoon highlights a little of what farmer go through, but essentially, you watch it to follow the culture shock of a city boy learning to be a country boy. He makes friends, overcomes challenges, and learns to thrive there. There are some serious moments, but it is well balanced out.

This is another series about cooking, but it is also about parenthood and family. Part of what makes this show so delectable is its fluid animation. However, because the characters are also excessively cute, the show feels like you are wrapped up in a fluffy blanket by watching it. Though there are a few jarring moments of parental drama.

This is kind of a strange on. Mushishi tells a lot of stories. Some of them are sad, and some of them are actually kind of scary. However, overall Mushishi is quiet and calm. It features beautiful visual scenery and rarely burst into anything loud and action oriented. Furthermore, while it has a range of stories, this also means that some of the stories are quite happy as well.

If you have any more relaxing anime recommendations, let fans know in the comments section below.