No matter what the current status of Studio Ghibli might be, there’s no denying that the legendary movie house’s relevance is as prominent as ever.

In fact, people have so much adoration for Ghibli, they’re willing to permanently tattoo the studio’s characters on their bodies. Someone even went as far as to get A full sleeve tattoo. And here is a collection of adorable Hayao Miyazaki tribute tattoos, sorted by movie, to inspire you:

Second movie of Miyazaki which launched the creation of Ghibli studio, it tells the story of a futuristic princess with ecological beliefs.

Not many tattoos from this movie, here a nice one: The most famous and iconic movie of Ghibli, the story of two little girls who meet a big spirit of the forest called Totoro, who became a largely popular symbol, loved by both kids and adults.

Framed Totoro resting near a river. Totoro and his leaf hat. The gang screaming : have you noticed the mask of No-Name from Spirited Away hidden in this tattoo? Finger Totoro with his umbrella. 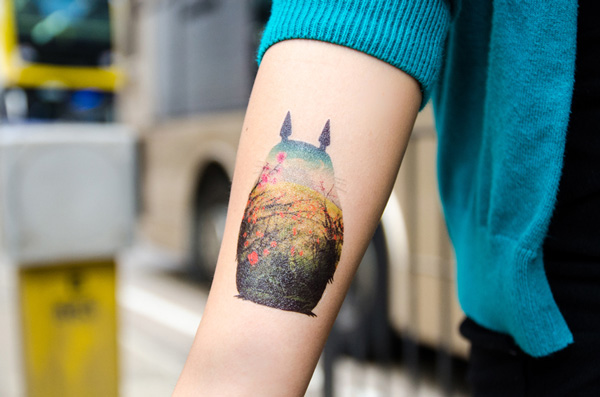 The story of a little witch, Kiki.

The little witch flying on her broom. The most violent movie from Ghibli, with a wolf princess fighting to save a magic forest. Also an ecological topic.

From the movie : bloody San and her wolf mother. A Kodama behind the ear. The strangest movie of Hayao Miyazaki, with a little girl, Chihiro, enslaved in the world of spirits by a witch and who is going to meet lots of creatures including a dragon named Haku, a very popular tattoo design.

The main character, from the movie, Chihiro, here in a great tattoo. Yubaba the witch : you need guts to ink that ugly character … The story of the very strange castle of a doomed magician.

This is the moving castle, which looks like a nice steampunk piece. A magic red fish called Ponyo meets a little boy and her love creates a tsunami.

Ponyo transforming into a little girl, a cute tattoo. The adorable scene from the movie where Ponyo kisses Sosuke to become human. And, to finish, a funny portrait of Hayao Miyazaki himself… So you think you are a Hayao Miyazaki fan? Go and get a tattoo!