Depending on who you ask, April 16th is kind of an important date in the Dragon Ball fandom. Rightfully or not, some people have taken to using the day to celebrate Goku. Since his actual birthday is unknown, any day in 365 seems just as good, but what about Vegeta? Since we’re just about to hit the point in the year furthest away from that fateful day, I figured now was as good as any day to celebrate the Prince of All Saiyans. And what better way to celebrate Vegeta than by writing about a subject near and dear to his heart: beating the shit out of Son Goku.

It’s been a while since Vegeta delivered anything approaching a decisive defeat to Goku. Since Namek, Vegeta’s been chasing after Goku’s accomplishments. Goku’s been beaten before, but he’s rarely received what we’d colloquially refer to as an “ass-kicking”–I’m talking not even putting up a fight. As the one often on the wrong end of a beating before Goku earns a new accolade, Vegeta might enjoy watching any of the following duels to see Goku getting dropped in a trash can for a change. 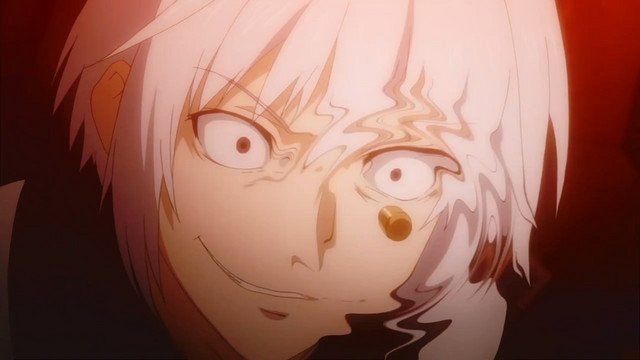 If I had to think of one guy who perfectly counters Goku, it’s probably Accelerator. His vaguely-defined vector manipulation power perfectly neutralizes Goku since it can redirect force, which is the only thing in this world that Goku understands. If his claims are to be believed, Accelerator could even survive something like the destruction of the planet, which Goku didn’t seem too confident about. The only way I can see Goku winning is using Instant Transmission to drop Accelerator off in space, but at best that would probably be mutually-assured destruction. Accelerator can redirect your blood with physical contact, and heart disease is one of the few things to have canonically killed Goku. 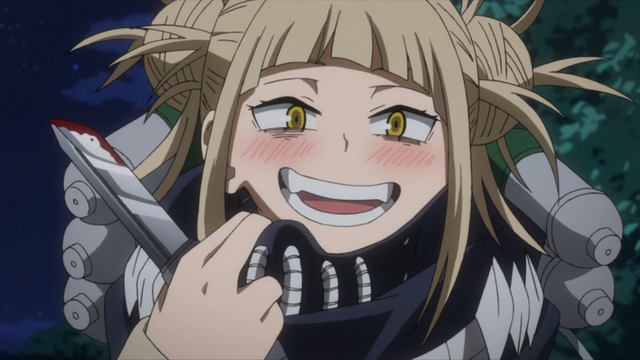 I’m not saying she could win in a stand-up fight, but it would never come to that–if there are two things Goku is afraid of in this word, one of them is syringes. With a necklace made out of jet-powered hypodermics, Himiko is basically represents a real-life walking horror movie too insane to recognize the difference in their power. The moment he discovers she plans to draw his blood, Goku’s number one strategy would become fleeing in terror. Himiko could never catch up, but Goku would forever live in fear, and imprinting that sort of psychological trauma is more meaningful than any bruises or broken bones. Basically I’m saying she might not beat the shit out of him, but she’d definitely scare it out of him. 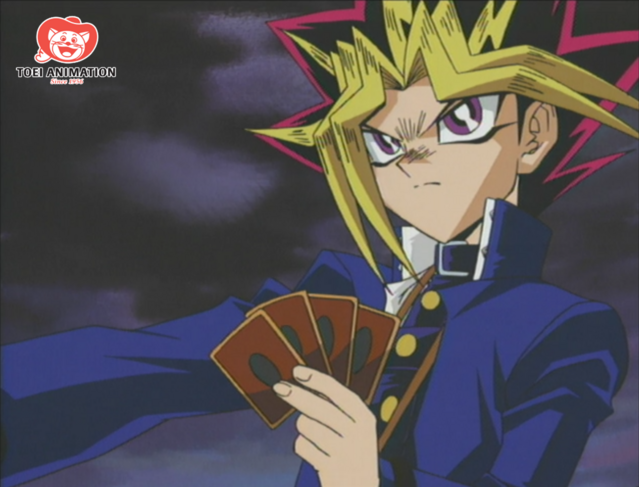 I’m just gonna come out and say it: no way Goku is ever gonna beat Yami Yugi in a straight-up duel… I’m honestly not even sure if he can read? No way a guy who believes so completely in his own fighting ability has the capacity to trust in the Heart of the Cards. Also, Yugi straight up cheats, using banned cards like Pot of Greed. On the plus side, we already know Goku can survive a trip to the Shadow Realm without too much trouble–Garlic Jr. wouldn’t be much threat to a Super Saiyan. 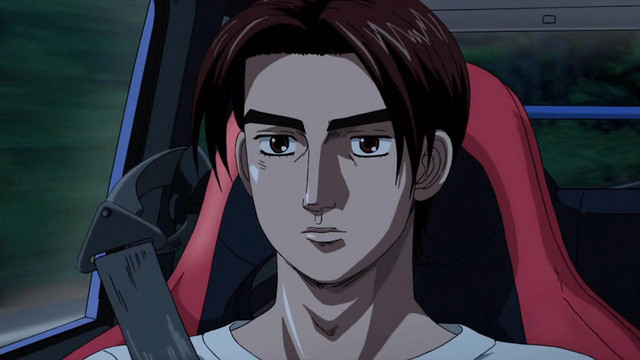 For someone who can travel across infinite distances instantaneously and move faster than the human eye can follow, Goku’s reaction time plummets to geriatric levels the moment you put him behind the wheel. Cars may actually be some sort of Kryptonite-like weakness for him–he’s just shit at driving. Not even the overwhelming advantage of flying a hover car would be able to prevent a race from ending with Goku ruining another one of Akira Toriyama’s magnificent vehicle designs in an embankment… or would drifting be harder without friction? 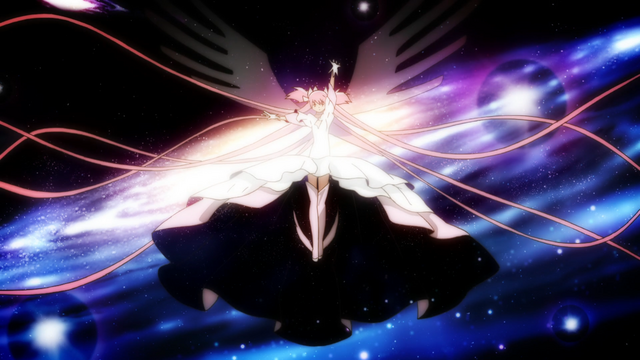 This one is pretty simple: Goku has yet to defeat a god, and Madoka is one. In Madoka’s case, we’re talking one of those history-rewriting, dimension changing, Zen-oh-level deities. Since she can canonically change how entire systems of magic work, having essentially solved the magical heat death of the universe, Madoka could pull tricks like turning effective power levels into quarts of gravy–this a pure discrepancy-in-power thing. Also, magical girls specialize in exterminating witches, and I’ve got this killer theory about the Dragon Balls and Grief Seeds which I can’t get into right now. 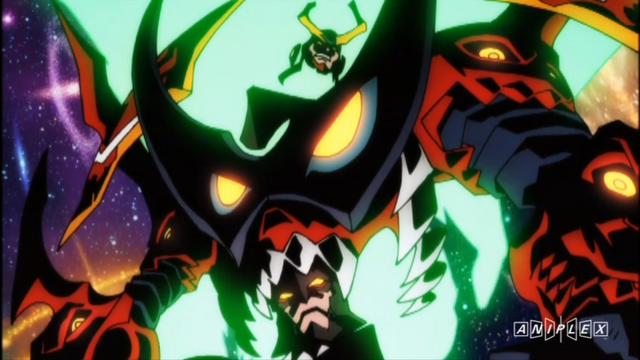 Goku’s pretty strong, but I don’t think he can KO the entire Milky Way. This is just a matter of size. How’s Goku supposed to beat a mech so big it uses spiral galaxies as shuriken? Good luck finding a cockpit in a robot 80 billion light years across. Even if he did manage to land a hit on Simon, the Gurren Lagann can keep its pilots alive despite fatal injury, so long as Simon’s fighting spirit isn’t dead, I guess this really wouldn’t even be a duel so much as the Gurren Lagann accidentally destroying Goku along with whatever planet he happens to be on during some bigger, more important battle. 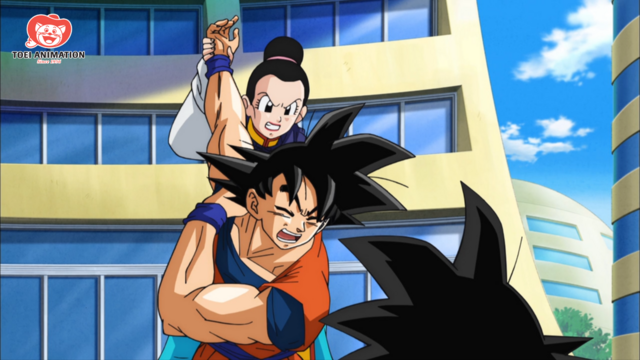 If caring about someone means giving them the ability to hurt you, then Chi-Chi might be the greatest strategist in the history of war. After getting Goku to marry her, she became his greatest weakness and, ostensibly, the greatest warrior in the galaxy. After losing to Goku once, Chi-Chi husbands Goku and never loses a (canon) fight again. Since needles aren’t alive, Chi-Chi is the only being in the universe he’s actually afraid of, reacting to her raised voice like Vegeta when the God of Destruction drops in for a visit. The guy obsessed with fighting never wants to take on Chi-Chi. I can only assume that’s one of the reasons why he’s always running away from home.

That’s the list. All pretty one-sided fights, I’d say. Even if Vegeta can never hope to catch up to Goku, I hope he can at least find some solace in the idea of someone else delivering the beat down. Whenever his birthday is, I hope Vegeta enjoys it.

Know of any other characters that would kick Son Goku’s ass? Let us know in the comments below!