Earlier this month, life seemed to be imitating anime as a Japanese guy Elmon_0715’s penchant for crossdressing was discovered by one of his friendswhen he posted a picture of himself done up as a cute girl.

In the exchange of messages that followed, the friend said he’d keep the teen’s secret…provided he’d agree to go out with him.

It’s unclear how serious the proposal was, but if taken at face value it dovetails with the rest of the details in seeming like it could easily be the premise of a manga or anime in the boys’ love genre. As a matter of fact, the whole thing sounded so much like a boys’ love series, therefore a Japanese artist @Thebakex2 went ahead and drew up a cover illustration for a fictional dojinshi, or independently-produced Japanese comic, with the title:

“There’s No Way My Friend Can Be This Cute!”

Will love blossom, or will the friend’s not-so-subtle advances fail to bear fruit? We never know. 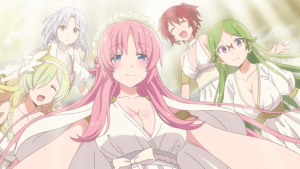