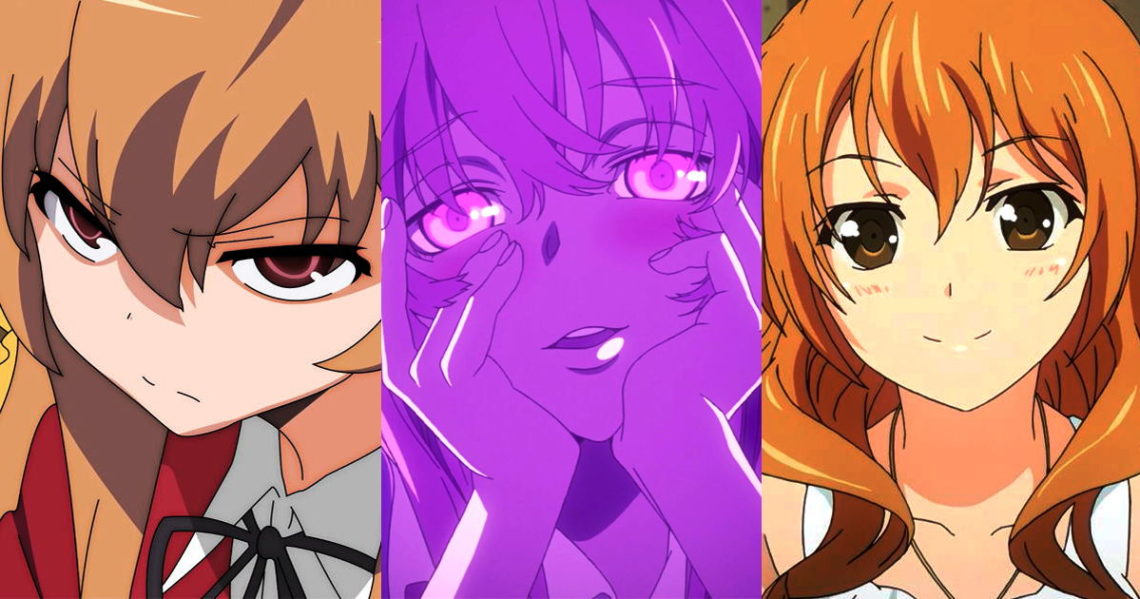 In anime, many, many archetypes have become very widely known throughout the community with each one receiving their own set of terminology. One such type that seems to be present in most anime nowadays is the dere types.

The common thing in some of the dere types is that their personality is directly proportional to their love interest. No Sh*t, Sherlock the literal meaning of their terminology contains their personality and the word “-dere” (Dere means lovey-dovey) as a suffix.

In this article, we’ll see all the popular dere types and character examples. So you can identify them when watching an Anime or reading a Manga.

Tsundere is a type of character who is initially cold and even hateful towards another person. But over time they start to show their warmer side as they develop their feelings towards another person. They usually remain in “tsun” mode in public but show their lovey-dovey side when the character is in private with their love interest. The word Tsundere is derived from the terms tsuntsun meaning “to be hateful to certain someone,” with the suffix “dere.”

Deredere is a type of character who is always joyful and full of energy. They are always kind towards the other people around them. Deredere characters are never afraid of showing their love towards their partner. DereDere is like another word for an extrovert.

Himedere is a type of character who wants to get treated like a princess. They like to command and rule over others. Quite often Himedere is same as Tsundere but more like princess-tsundere into this category. Himedere is mostly daughters of the rich. The terminology is made up from the word “Hime” which means princess with a -dere suffix.

Mayadere is a type of a character who is often a dangerous antagonist at the beginning of the series but switches sides after falling in love with someone from the other side. But they can remain hazardous and unpredictable for the protagonist or other main characters in the series.

Kuudere is a type of a character who has a distinctive personality. At the beginning of the story, they appear to be cold, cynical and unapproachable. They may seem very emotionless on the outside, but on the inside, they’re very caring at least when it comes to their love interest.

Dandere is a type of a character who is retaining a distinctive personality. They remain calm and quiet and avoid contact with others because of shyness. They seem to be cut off from society but are charming in a way. However, when they are alone with the person they are attracted to, they usually come out of their shell and show their active side.

Oujidere is a type of a character who is very flirty. They love to be treated like a prince by the person they love and the other people around them. They are Himedere type for males.

Kanadere is a type of a character who cares more about your money, power, and possessions. This type of characters cares less about your personality and behavior towards them. They are generally ambivalent and don’t care about a person unless they have money. They have mixed feelings or contradictory ideas about someone they love.

Hajidere is a type of character whose face gets red easily in front of someone they love. The blushing usually causes difficulty for them while confessing their feelings to their love interest. They are generally involuntary and triggered by emotional stress, such as associated with embarrassment or romantic stimulation.

Byoukidere is a type of character who is usually very sweet and kind but suffers from some sickness or disease (usually a fatal one.) They are often frail and weak physically.

Dorodere is a type of character who’s messed up or psycho for whatever reason on the inside but appears sweet and lovable on the outside.

What do you think of our list? We know there will be a disagreement here when it comes to fandoms. For a fact, we’re hoping for it, and we’d love to know what your favorite dere types are? Also lets us know if we miss any dere types.