Wolverine is back from the dead ever since his surprise appearance in Marvel Legacy #1. In this issue, it showed that he was also in possession of the Infinity Gauntlet’s Time Stone. Although we’re excited about Wolverine’s return, it doesn’t explain how Logan escaped after having his entire body covered in molten metal. The Reavers Are Back

After Logan dies in 2014’s Death of Wolverine miniseries, a clandestine few X-Men took his Adamantium corpse to an isolated cabin in Alberta, Canada. But the cybernetic mercenaries known as the Reavers discovered it and wanted to sell his tomb on the black market.

However, the X-Men arrive just in time as the Reavers attempt to steal it. With the plan foiled, Pierce, the head of the Reavers, chips off some pieces of the outer Adamantium casing only to reveal that his Adamantium tomb is empty. But it doesn’t explain what happened to Wolverine’s corpse.

The answer to all these questions is revealed by Kitty Pryde, in a flashback sequence.

While the X-Men were debating where to leave Wolverine’s tomb, Colossus comes up with a plan, which involves using Kitty Pryde’s mutant abilities to remove Wolverine’s corpse from his Adamantium outer layer. Once Wolverine is freed, the X-Men settle on a final resting place in a peaceful valley overlooking mountains and leave the Adamantium statue as a memorial. Either Wolverine gained life and escaped, or someone discovered where he was and took him. We should know the answers in Hunt For Wolverine‘s four spinoff miniseries: Weapon Lost, Adamantium Agenda, Claws Of A Killer and Mystery in Madripoor. 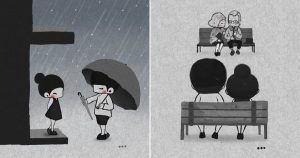 Girl Draws Herself In Famous Cartoon and Anime Styles, And The Result Is Unbelievably Spot On