Whether you’re looking for an anime to fill a large space of free time, or you’re just wanting a series to give you some good mileage, the long-form anime is worth taking a look at. Typically Shonen Jump, these anime tend to have a bad rap. Many people sing the praises of 12-13 episode wonders like Madoka Magica, or 25-26 episode classics like Cowboy Bebop, Samurai Champloo, etc. These tend to have higher production values and better quality animation than their long-form counterparts. However, long-form anime present advantages of their own.

I spent a single day getting to know Madoka, then the series was over. On the other hand, I’ve spent years getting to know Naruto and Luffy. With Long-form anime, you get to witness characters go through entire stretches of life. The abundance of episodes also allows for more time to develop the setting, which I’ve found is an important part of immersion. Long-form worlds are (usually) more fleshed out. The One Piece world is such an expansive, GIGANTIC-seeming world, and the sense of depth to it is eons ahead of most short-form anime. Enough with that, though, let us embark.

PS: I’ve only seen the first 60 episodes of Fairy Tail, so it’s not included in this list. As it stands, it’s about on par with Bleach or Naruto for me.

While Goku is one of the most recognizable and beloved characters in all of anime, the show really does live up to the stereotype it’s been branded with. It’s long-winded to the nth degree, and it’s just a predictable story (move on to the next, inevitably stronger villain). Fight choreography is still among the best I’ve ever seen, animation and voice acting are top-notch for the time, and props to the most recognisable english dub of all time. All in all, it’s worth a watch if you’ve never seen it, but only after you’ve seen the following top 5.

Bleach was the first anime I started from when it debuted in 2004, and watched until its conclusion in 2012. It was my obsession and my life, and hands-down my favorite anime for years. It’s got some good supernatural flair, some fantastic powers and fights, plenty of violence, and some decent secondary characters. Kenpachi Zaraki is my favorite BA character in pretty much all of fiction. However, Ichigo is a pretty bland lead, and can fall into the emo/just plain wimpy category at times. Fillers are rife in this series. Entire arcs are filler in Bleach, with over 100 episodes being non-canon, and honestly, they’re just not that good. I like the samurai-ish, ancient Japan feel of the soul society, but Bleach’s world feels the least expansive of all of the top 5. So, yeah. Number 5.

I hopped on the Naruto train pretty late in 2011, until I just finished the manga in December of 2014. Ninjas are the name of the game, and what a game they play. Got some good territorial warfare amongst villages, plenty of feuds between clans, and some awesome power sets. Naruto is a universally hated character for the first part of the series, until Shippuden. That’s a problem, considering it’s 220 episodes of having a despicable main character. IF you can slog through Naruto, the payoff in Shippuden is oh so worth it, but that’s only if you’re okay with watching 220 sub-par episodes. Filler is also rife in this show, making up over 40 PERCENT OF IT. Like usual, it’s not usually very good. Supporting and secondary characters are hit-and-miss in this show, and like Naruto, many of them don’t become likeable/complex until Shippuden. 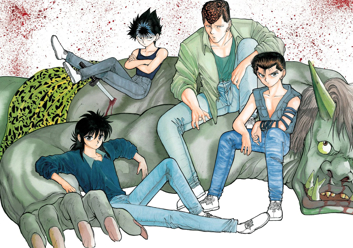 From the mind of Yoshihiro Togashi comes this classic. Yusuke fills a pretty generic main character role, but he’s likeable all the same. VERY solid supporting cast here. Story is intriguing, full of supernatural fights and action. Some very memorable villains in here, other shows today could really learn from some stuff this show did with its villains. The series is good on all fronts: animation, characters, voice-acting, and plot. Nothing makes it absolutely fantastic, though. This one has held up over time, and I strongly recommend a watch, unless of course, you haven’t seen the top 2. In that case, you should be spirit-gunned in the face.

Eiichiro Oda started this manga back in 1996, and modelled many of the characters after his favorite anime of the time, Dragonball Z. The show’s lead is Monkey D. Luffy, and he stands at the top of anime protagonists. He shares many similarities with Goku, but where Luffy shines the most is his role as captain of his crew. After 600 episodes, I want to follow him, goofy nonsense and all, and I truly feel like I am a member of the crew. What a crew it is, too. Each crew member of the Straw-hats has their own excellent backstories, and they’re as varied as 9 people could be.

The first 300 episodes of One Piece sport a vibrant art/animation style that suits the series’ happy, piratey vibe absolutely perfectly. Later, the animation gets cleaner and it lost a bit of its unique luster, but it’s still solid. Opening and closing themes are not as catchy or likeable to me as the ones in Naruto or Bleach, but the orchestral score of One Piece blows them out of the water. In fact, I’d call it the second best soundtrack in anime, behind number 1. English dubbing in OP is alright, obviously it’s nowhere near the Japanese dub, but it’s passable, nowhere near the horrific performances we hear in some dubs. Also, the filler is kept to a minimum in OP, only about 10% of the show is comprised of it. With at least a decade’s MORE worth of episodes planned, we are certainly on the cruise for a long while, and I am perfectly alright with that. 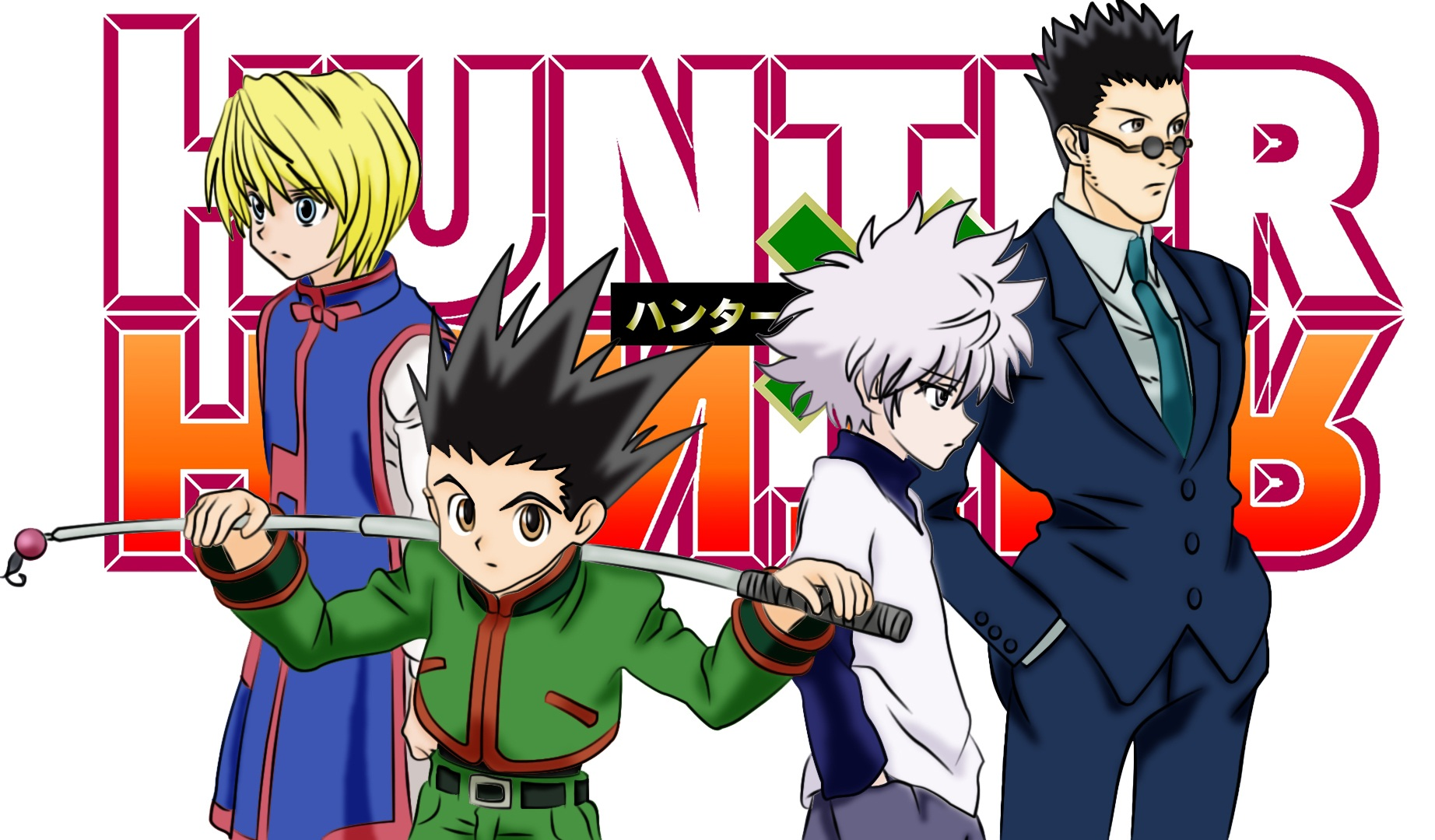 Yoshihiro Togashi may have brought us Yu Yu Hakusho first, but that was just a primer for what was to come. With his latest manga, Hunter x Hunter, he has reached the apex of the Shonen genre. I can’t describe how much I enjoyed this series. Hunter x Hunter is a masterpiece. It has elements from all the other top 4, but if I had to say which one it’s most like, it’s really a mix of Naruto and Yu Yu Hakusho, with its own uniqueness thrown in. Hunter x Hunter starts as a lighthearted affair, feeling similar to One Piece, but as the series progresses, boy does it ramp up the maturity. If you’ve seen other anime on this list, you’ll immediately recognize similar characters in Hunter x Hunter, (i.e. Kurapika and Sasuke), but once the initial stereotype has been established, prepare to have them defy your expectations. A few deaths in here almost felt Game of Thrones-ish or reminiscent of the unrelenting deaths in Attack on Titan, except I didn’t expect them from HxH, which made them all the more impactful.

As far as animation goes, the series debuted in 2011 and manages a very neat balance between 90’s style character designs with modern-day, clean-line animation. As referenced in the OP explanation, the score in HxH is my personal favorite of all time. The opening theme never technically changes songs, however, the series does alternate the openings between two verses of the same song, along with changing up the opening animation sequence to fit the current story arc. Hunter x Hunter covers all the bases: intense action, excellent paced plot-lines, extremely memorable characters, beautiful sound and animation, and a satisfying conclusion. (At least in the 2011 anime). So… yeah, that’s a wrap!

The Best Anime That Are 13 Episodes or Less

Recommend Me Manga: 15 Romance Manga That Haven’t Been Animated (Yet)

6 Summer 2018 Anime Series You Should Watch This Fall