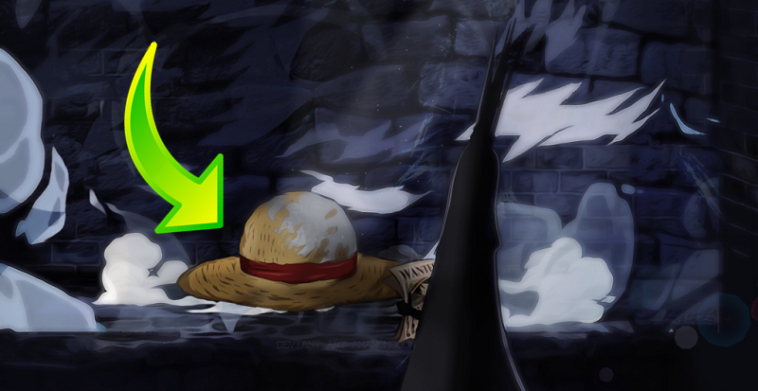 All the royals participating in the Reverie have arrived at Mary Geoise. Vivi, Rebecca, Shirahoshi, and Dalton talk about how much they like Luffy. In Impel Down, Doflamingo is in solitary confinement and talks about Mary Geoise’s National Treasure.
Back in Mary Geoise, a lone figure, carrying Luffy’s new wanted poster, opens the door to a freezing vault. Stepping inside, the vault is revealed to contain a single object: a massive straw hat the size of the figure. Who’s the original bearer of this Straw Hat? Many also speculated that the original bearer of the Strawhat is Joyboy. This may be a bit cliche, but hear me out. The Ancient Kingdom was the last thing we know before the Void Century. Joyboy was the ‘Leader’ that time. It seems he made an impact in the world, with his apology being implanted into a Poneglyph. He was also the LAST person we know of (by that I mean, from 800 years ago, we have yet to learnt of a person’s name) from before the Void Century. Another speculation is that the big straw hat is an Ancient Weapon. The Celestial Dragons got their hands on it at the end of the Great War. It is imbued with the joint haki/ambition of the D. clan with the purpose of helping the user unify the world.
Essentially the wearer of the hat can wield incredibly powerful haki, more specifically Conqueror’s Haki which is why the Celestial Dragons don’t just simply destroy it. The Celestial Dragons could potentially use it to enslave people and bend anyone to their whim.