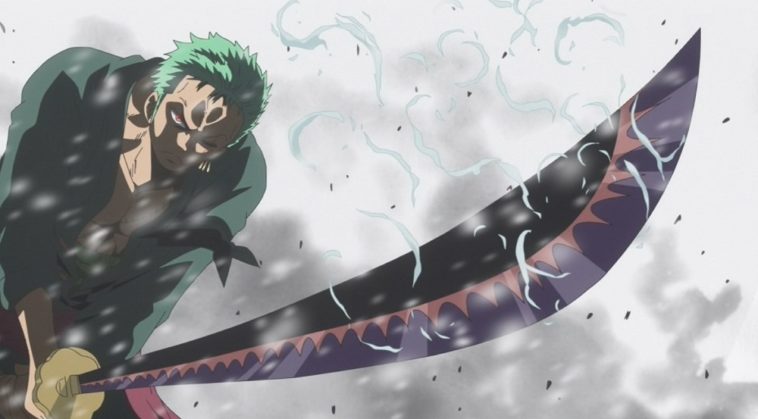 Shusui is one of the 21 O Wazamono grade swords and was once wielded by the legendary samurai Ryuma. It is considered the national treasure of the Wano Country.

Shusui is a black blade, it is designed to tremendously increase the damage potential and destructive power of the user. At one point, Zoro commented that Shusui’s greatest attribute is its durability, claiming that even if a dinosaur were to step on it, the blade would not bend a millimeter. The Kozuki clan of Wano are connected with the Poneglyphs as they are the ones said to have inscribed the messages onto the stones. The Poneglyphs are black stones, with the exception of the Road Poneglyphs which are red, and are known for being impervious to damage, even from explosions.
I believe that there is a clan in Wano Country that uses the Poneglyph stones to craft swords. The raw material was probably found somewhere close to or on Wano, which is why the World Government is never shown to have this material. The swords made from this material are all the highest quality, being both extremely sharp and extremely durable, even to the point that they can be used to break other swords in combat.. This is why Wano country swordsmen are so feared, since they not only have powerful styles of swordsmanship, but the swords to back it up. The Poneglyph material is black and extremely hard, two characteristics shared with Shusui. I know that’s not a lot to base a theory on, but Shusui and the Poneglyphs both being from Wano make this very possible in my opinion. It could even be that Mihawk’s sword, Yoru, is made from the same material. Going even further, maybe all 12 of the O-Wazamono, the top swords in the whole One Piece world, are made from this material, and that is what gives them their legendary status.

Now, not all Poneglyps are black. We know that the Road Poneglyps are made from red stone, which may be different from the black stone. This is complete speculation, but what if there are swords made out of the red stone which have different properties? Maybe they interact better with Haki, or give the user the power to cut fire, like Kinemon. I’m not too sure, but it’s a possibility.
When we eventually get around to the Wano arc, I think it would be cool if Zoro got a new sword crafted for him out of this material, which could replace Shusui if he gives it back. This sword could rival even Mihawk’s sword Yoru, and would probably become his main sword for Ittoryu (1 sword style) techniques.*Theory by kingofthenexus