Making this list was very fun for me, as I had to watch all these great movies again. Not only are these the best anime movies of all time, but they are also some of the best movies of all time in general. Anime is not as popular here in the west as it is in Japan, but is getting more and more popular everyday, so I thought I would do a favour for people who are looking to get into japanese animes and give them a little bit of a heads up on some of the best. I have scored them by animation, story, my personal opinion and overall popularity. Have fun! 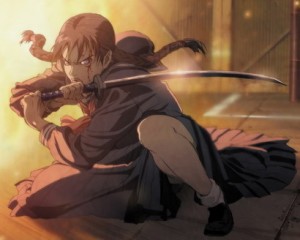 I start off with this one; even though it is not as popular as the other movies on this list, it is a personally favourite of mine. Probably the darkest on here (maybe apart from Ghost In The Shell, which was made my the same creators), which you aren’t really seeing in anime movies these days. The animation is great and has a great concept, with non-stop action and violence. The only downfall and the reason why it’s so low down on the list is because it fell short with an abrupt ending and is only forty eight minutes long.

9. Ghost In The Shell Next on the list is Ghost In The Shell. Not that old but a classic anime movie in it’s own right. Taken influences directly from Blade Runner and Akira and with an amazing soundtrack, this is a must see film for any anime fan. The Wachowski brothers who created The Matrix franchise has openly said that without Ghost In The Shell, then The Matrix would never have happen. With only just over an hour long, it still falls short for a good movie length. No top anime list would be complete without Spirited Away. A magical movie that officially put Japan on the map as creating some of the best animation and story telling in the world. Hayao Miyazaki first popular movie in the west, which spawned a huge fan base of all his past and future Studio Ghibli movies. Because of the successful of this movie, Disney now have the rights to all of Ghibli’s output that did not have previous international distribution, which sky rocketed it to even more success One of the best game to movie adoptions ever! The movie stayed very true to the games mythology and has some great fighter scenes. The ambitious drive Ken Masters has for finding Ryu and the emotion the movie portrays between two sibling rivalrys gives the movie enough pace to keep you on the edge of your seat through-out. M.Bison makes as a perfect villain and the deleted Chun-Li shower scene makes this the best video game movie out at the moment!

6. Nausicaa Of The Valley Of The Wind The very first Studio Ghibli film! With a great cast, and a amazing fantasy story, this is one of my all time favourites. A story about humans vs bugs; not a very generic storyline but the balance between beautiful animation and acting uniquely brings this movie to it’s own. Watching it, you wouldn’t of thought this movie was twenty seven years old! Christian Bale! That is enough for me to get interested in this movie. The second most successful Studio Ghibili movie after Spirited Away. With an all-star cast and a imaginative fantasy story line, you would expecting nothing less than a beautiful movie that captures the minds of children but also is equally enjoyable for adults. With girls falling in love with Howls charm and Calcifer The Fire Demon comedic dialogue, this movie blends the perfect mix of emotion and humour. Probably my favourite Studio Ghibili movie. A movie about Gods and Demons and one exiled prince adventure to save the world. Some of the best animation I’ve seen; this whole movie impresses me with the best animation I’ve ever seen on animals in a motion picture. Sometimes very gory, but doesn’t distract it from the overall story; a story relating to the real life conflict between man and nature (more of a personal touch from Miyazaki). The soundtrack is amazing, a mix between traditional Japanese and West orchestra.

3. Grave Of The Fireflies This movie is probably the most emotional on the list. A story in which a young boy and his little sister have to struggle to find their way in life after their parents die due to war. A realisation on what actually happened to most people during the World Wars. The story alone has made this one of the greatest war movies ever, not only for animation but for all movies. A movie I would suggest anyone to see, as I can not put it in words how great this is. Ninja Scroll!! The best martial arts ever! Anime or not! With a great mix of sex, violance and animation it is one of the best adult animation movies of all time. Ninja Scroll has influenced many recent movies and games, including Metal Gear Solid 3 on Playstation 2, which personally I thought was a straight up copy except for a few character changes. If you like gore, swords, sex, fantasy and ninjas, then this movie is definitely for you. What can I say about Akira which hasn’t been said a thousand times? Constantly voted the best anime of all time, and rightly so. All hand drawn animation, this movies unique animation style has made it stand out from the rest. A great interpretation of a futuristic a Tokyo, with every little bit of detail. Every science fiction film or otherwise has often given credit or influence from Akira. Twenty three years old now but still nothing has come close to the creative story or the animation of the best animation movie ever. You will have to watch this movie more than once to understand it fully. A live action movie is suppose to be in the works with Leonardo Dicaprio and Zak Efron connected with the project; fingers crossed it will be as good as the original!