Home Top10 Top 15 Anime Villains
Facebook
Twitter
ReddIt
Pinterest
Of course the heroes and heroines are the main focus in most anime, but sometimes we have to hand it to the villains for making the show more interesting…even if our hearts get ripped out of our chest and beaten down by them. Here are the top anime villains that have surely given their reasons of why they should be on this list!

If you watch Soul Eater you’ll know that Asura is the main focus out of everyone else due to his legendary status. He’s evil incarnate and can easily take over whoever he wants. Asura became the very first Kishin, which means he willingly consumed a living human soul which is always a big no-no. He’s amazingly strong and consumed his very own weapon Vajra. He’s the very essence of madness in Soul Eater and is the main antagonist. With little to no conscience, cunning skills and an insatiable want for power, Dio has the right to be on this list. He’s an immortal vampire that kicked the protagonist’s dog during his first appearance! How could you not call him a villain after hurting a poor dog?! He even slowly poisoned his own father to death over a course of five years. Now that’s evil. I truly felt like Envy was one of the worst of the seven deadly sins in Fullmetal Alchemist. I am pretty sure that everyone would agree with me on this. Envy is the one who kills Maes Hughes and nobody will ever forgive him for that. Maes was too adorable to kill! Envy jokes around about human misery and plays with his targets before killing them. He even feels absolutely no remorse for the things he has done. If you think Envy was bad, check out Father. He’s literally a clone of Edward and Alphonse’s wimpy father. Father is the one who created all the homunculi including Envy. At first he was known as the dwarf in the flask, having started out on the bottom hoping to get to the top. He is cold, heartless and won’t take pity on anyone, not even his precious homunculi. Even though he says he wanted a family of his own, who would believe that malarkey? There are many villains in Dragon Ball Z and Frieza is definitely one of them. He is a galactic emperor who is ruthless and powerful. Frieza has an entire range of transformations which are all different in their own way. He states that his fourth form is his most powerful and his original form. His other forms suppress his power. Might not want to get on his bad side then. Gilgamesh is a half-God, half-human king who rules over the Sumerian city-state of Uruk way before Jesus Christ was born.  He started out as a tyrant who had no care in the world for his people, but soon began to change his ways when he acquired a friend. So in the beginning he was a villain.Which is why he’s so arrogant and selfish, even after changing his ways. You’d probably argue that Izaya isn’t much of a villain, but he kind of is. He’s an underground information broker which means he knows everything about everyone. He loves starting fights with Shizuo that always end up in a chase.Izaya’s looks certainly give a lot to the villain aspect; he has a very devious and conniving expression plus that coat with the fur doesn’t help at all. Johan is from Monster and is truly a monste. He’s been described as the anti-Christ figure with a description of “a beast with seven heads and ten horns.” Now how could you possibly say that’s not evil? He’s a master manipulator with amazing exploitation skills. He doesn’t kill anyone. He manipulates somebody else to do the killing. It’s like he doesn’t have a single drop of blood on his own hands. 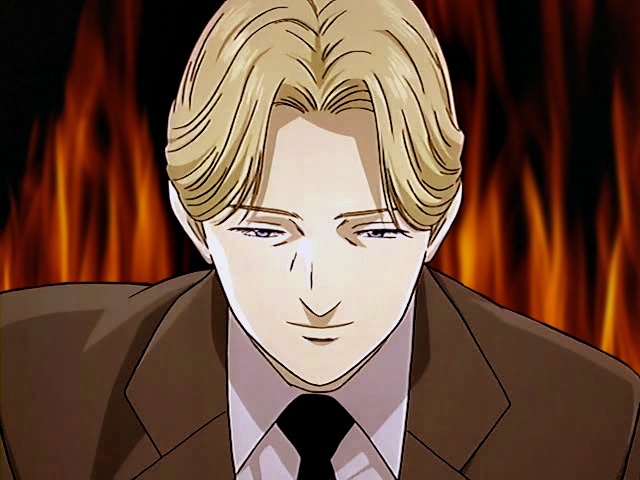 Light is very similar to Johan in many ways, especially in the ways of manipulation. Of course the only way Light kills people is by using the Death Note, but still. He’s conniving and manipulative, evil and not right in the head. Even though his main goal is to rid the world of all criminals, he still goes way too far with everything. Yes of course there would be a villain named Medusa. There always has to be, right? Well in Soul Eater Medusa is certainly one of the main villains. She’s wicked and is such a huge temptress when it comes to all things evil. With all her manipulation, she’ll get anyone to do anything that she wants them to. On top of being evil incarnate she is a witch, which means she has incredible powers. Snake-like powers to be exact. Now this guy is my ultimate favorite guy out of all the villains. He is the reasonInuYasha exists. He is the main driving force behind all the other characters. Naraku is the reason why Inuyasha has anger issues. Naraku used to be a man named Onigumo who was full of hatred for all of mankind. That’s why he became so powerful in such a short time. For one a villain has to be completely evil, right? Most of them seek immortality and the death of all mankind? Well Orochimaru got the whole invested in immortality gene. He performed so many unethical experiments on innocent lives just to become immortal. Performing experiments meant that some of those innocent people had to die. Which is why this man is evil. Ah yes…Aizen. How could I have almost left out this powerful villain? Being the former captain of the 5th Division in the Soul Society, he feels it is his duty to wage a war on the Soul Society. He’s definitely on the smarter side, having his entire plan thought out beforehand, even when he was still captain. He’s actually very kind despite being a Bleach villain. He was also very well-respected. Who knows what really tipped him off to make him evil. You might just have to watch all 16 seasons, over 300 episodes, to find out. And there’s this guy…how do I even describe this guy? He was chosen by Adolf Hitler to execute a very top-secret mission to perfect vampirization. Any person involved with real and/or anime Hitler is pure evil, right? Well the Major just loves his warfare and hates life so much. He’s the ultimate villain. The villain of Cowboy Bebop is the main antagonist. He’s cold hearted, bloodthirsty, power hungry and very ambitious. I guess all villains have to have those traits. He will literally kill any person that gets in his way of what he desires. Occasionally he’ll show a bit of sympathy when having flashbacks of certain memories. Like any other villain, a scowl is permanently on this man’s face.