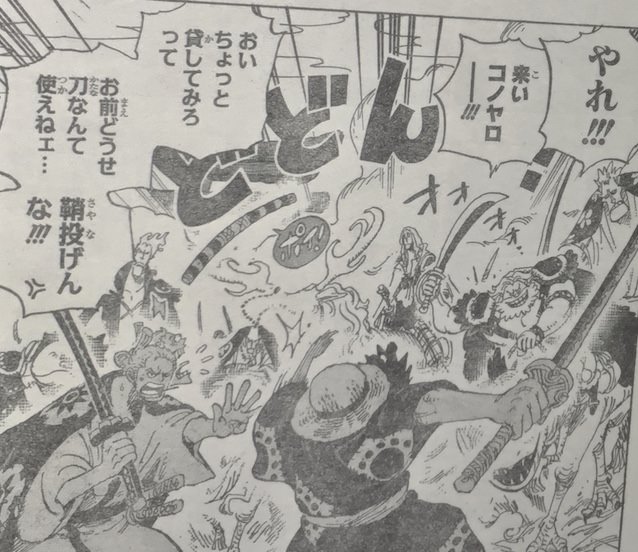 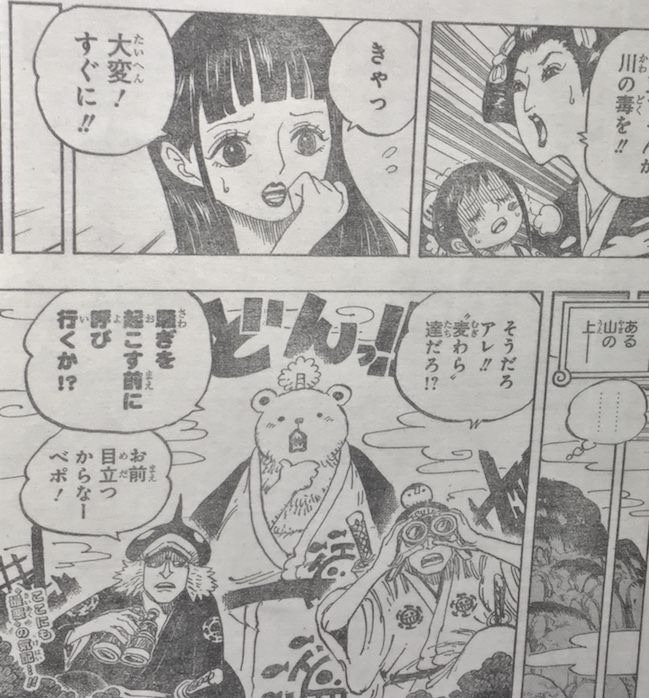 Hawkins: Do you guys know who runs things currently here on Wano?

Zoro: You shouldn’t say that, Luffy.

Luffy: What I just said now was lie! (Directed at Hawkins)

Hawkins: The chances of you guys being alive in a month’s time is 19%

As Hawkins minions draw near, the sword Luffy is holding picks Zoro’s interest

Zoro: Is that a Meito? (named sword) please show me the sword! (Zoro asks a smug Luffy to show him the sword cause he senses the presence of a meitou)

Luffy ignores Zoro’s and proceeds to beat down his opponents, the Lizard that Hawkins minions are riding on flies towards him.

Luffy grabs the Lizard by the nape of it’s neck, and throws it at Hawkins but with his straw blade hand (i.e a blade made out of straw?) Hawkins thrusts and kills the lizard.

With the Straw Straw ability, Hawkins stocks a number of clone straw dolls of his minions via the straw dolls, Hawkin’s damage is transferred to his minions.

He draws a Tarot card, and it turns out to be The Fool in opposite position.

Then his subordinates begin to break up because of the effect of this card.

Luffy and Zoro are riding on Komainu to take Otama to a doctor.

Hawkins draws a new card, and it turns out to be The Hierophant in opposite position, which is the chasing card.

The straw blade starts to chase Luffy and Zoro.

It looks like the straw blade has a connection with Hawkins.

When Hawkins swings his blade, the straw sorcerer swings his spiked weapon.

Zoro cuts the straw blade into half, but the one gets injured is a subordinate of Hawkins. Hawkins is holding The Hierophant (the escort card).

Then he predicts someone will come to help Luffy and Zoro to escape and he gives up on chasing them.

As Luffy and the other’s ride on Komachiyo’s back and move towards their destination, a Lady starts thanking them.

It’s the woman Zoro saved from scoundrels right before he met up with Luffy.

A little while ago, in midst of the turmoil, she hid weathering the storm inside komchiyo’s tail.

Her name is O-tsuru. She owns a Tea shop in a nearby town. It seems like she’s an acquaintance O-tama, in order to cure O-tama, she suggests that they stop by her store to give her some medicine.

In O-tsuru’s tea house, the Sumo wrestler Yokozuna “Urashima”? is requesting something from the “sign board girl”?

O-kiku Urashima: “If you become my bride, you won’t even need to work and you’d be able to eat as much rice as you want from the finest plantations/farms”

Luffy and the others happen upon that scene.

Bepo: Before they start a fuss/any commotion, should I go and call them.

Shachi: You stand out too much, Bepo…

Break next week, it’s holiday in Japan (no Weekly Shonen Jump on sale) from Redon

Luffy doesn’t use the katana in the chapter. He punchs enemies with the hand that grabs the katana, but he doesn’t cut anyone lol

When Hawkins is injured, a little straw doll “dead”.

Hawkins creates a big voodoo marionette that chases Luffy and the others.

That voodoo marionette can spit nails. Some of them injure Zoro.

Bepo and the other has kimono too.