It’s that time again. The fall 2018 season has progressed enough where the good rises to the top and the bad ends up completely forgotten. However, you don’t have to sort that out yourself. You’re busy, we get it. So we watched the new season for you to give you a clue on what was worth watching.

As always, this only covers wholly new series. So any subsequent seasons won’t be included. If you are a fan of A Certain Magical Index, Golden Kamuy, Sword Art Online, Jojo’s Bizarre Adventure, or Fairy Tail, then by all means go watch those.

Rascal Does Not Dream of Bunny Girl Senpai

On a day like any other, Sakuta is in the library, and there he spots a wild bunny girl. This wild bunny girl, or rather, Mai Sakurajima, a semi-retired actress dressed like a bunny girl, catches no one else’s eye. In fact, Sakuta seems to be the only on that can see her on that day and on many other days. This phenomenon, called Puberty Syndrome, is rumored on the internet. As Sakuta decides to solve the mystery, he grows closer to Mai and other girls that suffer the same malady.

Why It Is Worth Watching? – Either you were drawn in by the bunny girl or you were put off by the bunny girl. Regardless, this show is well worth watching if you like romance anime series, even if you normally hate school romances. What sets it apart, really, is the characters, especially the male lead who isn’t dense and plays everything straightforward. A young priestess fresh out of the temple is excited to start her life as an adventurer. On her first day, she joins an adventuring party to go slay some goblins. However, like so many young adventure parties before them, they underestimate the goblins. It ends with two dead, one viciously raped, and the priestess saved from fate by a man whose only mission in life is to slay all the goblins.

Why It Is Worth Watching? – Goblin Slayer got off to a big boost in the fall season by leading off with a bit of unexpected rape. The funny thing is that everyone freaked out about it and there really wasn’t anything too shocking in the rest of the series. What really makes it intriguing in watching how a simple premise of “I just kill goblins” evolves into an actual story. For Sakura Minamoto, she started her day off normally, right up until she skipped outside and got hit by a speeding truck. She died of course, but 10 years later, she wakes up as… a zombie. However, her story is just beginning as a man wants her and several other undead girls from throughout Japan’s history to become a regional idol group to save Saga from becoming an obscure prefecture.

Why It Is Worth Watching? – The only reason to watch this show, in truth, is to laugh. For a comedy series, that is really the only reason one needs. It has a unique premise, to be certain, but you watch this show because of the jokes within, especially if you are already a fan of idols. After passing a robber, Satoru is killed. He is then reincarnated in a fantasy world as a slime monster. Oh, the shenanigans he will get up to.

Why It Is Worth Watching? – Every season has its isekai series. It seems practically mandatory now, but unlike some entries, this one actually finds a way of drawing you in despite what it is. It pokes fun at isekai and it presents a unique premise. The main character isn’t some grandiose hero, but rather a lowly slime. Even if it is one big long joke, it is, at least, a funny one. 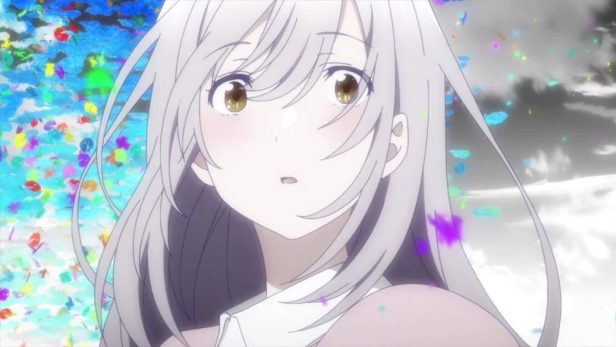 In this world, there is a minute amount of magic left in the world. Hitomi is a descendant of an old witch family, and also lost her emotions and color at a young age. Feeling bad for her granddaughter, the great witch Kohaku sends her into the past where interactions with her young self and Kohaku’s friends will hopefully foster some growth in her granddaughter.

Why It Is Worth Watching? – Imagine everyone else sees beautiful colors, and your whole world is grey. Imagine is everyone else is having fun and you have no friends. Imagine someone could do something about it with magic. While Iroduku has its initial issues, it becomes a pretty touching slice of life series. As a young girl, Yuu has always loved shoujo manga and has awaited a love confession that sets her heart aflutter. However, when she gets one from a junior high classmate, she feels nothing. Unsure how to respond, she watches Nanami, her high school student council president, expertly let someone down who just confessed to her. Seeking her guidance, she asks for Nanami’s help. However, the next love confession she receives is from Nanami, could this be the romance she was waiting for?

Why It Is Worth Watching? – There have been some decent yuri anime in the past few seasons. However, many yuri stories can be a bit over the top about love. This is a story about wanting to fall in love, but then suddenly looking around and realizing you don’t quite feel the same as others seem to feel. It’s a pretty spot-on theme for a yuri story to explore.

Did you like another series from Fall 2018 that you don’t see here? Let fans know in the comments section below.