The legacy of Naruto was told through the Naruto and Naruto Shippuden anime from 2002 to 2016. Starting April 2017, a new legend begins – BORUTO: Naruto Next Generations! The announcement for the new anime was made at the 2017 Jump Festa event in Japan. No additional information was announced, however, we believe this anime will at least cover the contents of the Boruto manga. TV Tokyo, the Japanese TV station which will air the anime has launched a site for the anime. The first trailer for the Boruto anime has been released, take a look at it below. 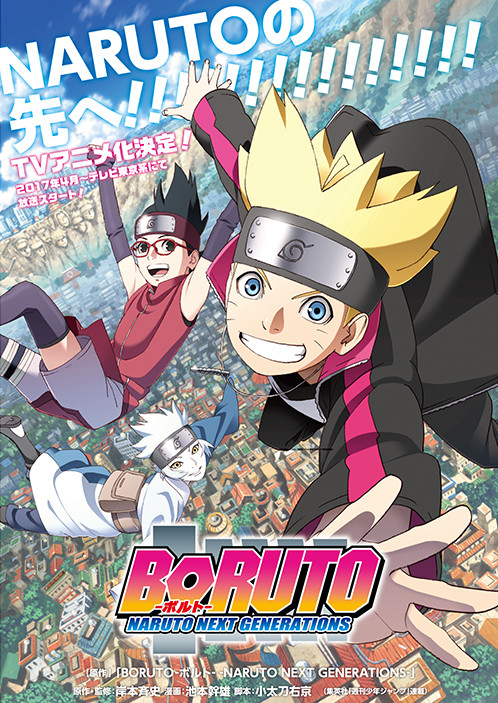 Here are comments from the voice talent:

BORUTO TV anime. It’s a dream come true. What will happen in the world Boruto’s father, Naruto, made in the previous generation? What will they do? The mission at Three Man Cell, the happy family… There’s so much I want to see. I hope to go on exciting adventures with Boruto, Sarada, Mitsuki and the rest of the gang in my work. I hope you enjoy BORUTO as much as you did NARUTO! Watch me be awesome!

Last year, I had wished I could spend a little more time with Sarada, now that I was given the part. When I learned that BORUTO would be given an anime adaptation, I was ecstatic, but also a little terrified. I’m once again reminded of how much of a masterpiece NARUTO is. I hope to contribute to Konoha’s amazing history in an honest and careful way.

Naruto and his buddies shared stories of grit, friendship, love and camaraderie, and created a bond not just among themselves, but also with the audience. I hope to play Mitsuki in a way that cherishes that bond, and creates new bonds with everyone in BORUTO. I can’t wait to see who I’ll meet through Mitsuki!

After fifteen years spent watching over, cheering for and working with Naruto and his friends, they’ve finally grown into adults. I’m filled with sadness and gratitude. However! Konoha’s Will of Fire burns on! Boruto has been passed the torch, and they will surely give us more to see as they grow up. It’s Naruto’s children’s turn to tell their stories. It’s a new age in the world of ninjas, where trouble is sure to brew. I hope you join me in rooting for Boruto and his friends in their struggles, fights, friendship and growth!