Many reborn artists, myself included, prefer the look of an opened nose in their dolls. After all, babies have open nostrils, so adding this subtle detail to your reborns will create a more realistic appearance, and that’s what your ultimate goal should be when reborning a doll. The problem, however, is that opening a doll’s nose isn’t as easy as it sounds. There are literally dozens of things that can go wrong during this step. You could open the nostrils up too much, damage the upper lip, or tear chunks of vinyl off from the sides of your doll. If you decide to open up your doll’s nostrils, you need to be extra cautious and take your time to ensure no damage occurs.

Opening up a reborn doll’s nose is a decision that only you can make. Some of the kits and techniques used by experienced artists create textured layers around the nostrils that mimic the look of an opening. Along with proper shading, coloring and an application of matte varnish, it’s almost impossible to tell the nose hasn’t been opened from far away. With that said, many artists (myself included) are perfectionists when it comes to reborning; therefore, opening up the nose is a necessary step that we must go through before we can label our reborn doll as complete. If this is your first attempt at opening a doll’s nose, you might not know where to start. After all, it’s not like there are instructional booklets that come with your dolls explaining the process. Well, have no fear as we’re going to reveal the easiest and most effective method for opening up a doll’s nostrils. While some artists may have their own preferred method, this is hands down one of the easiest ways. Best of all, there’s a very slim chance of making a mistake as long as you follow the directions on this page.

First and foremost, you’ll need to pick up a few basic items and supplies. Our list of supplies may seem a little unorthodox to say the least, but you’ll see how they are put to use later. Here’s what you’ll need to open up your doll’s nose and nostrils:

Once you’ve acquired the necessary supplies and are ready to open your doll’s nose, go ahead and remove the head from the rest of the body. This will give you more freedom and reduce the chance of damaging your doll’s body. Besides, there’s no sense in keeping it attached to the body when the nose is only in the head. We talk about how to stripping the limbs off a baby doll on a different page to our side, so refer to it if you’re having problems with the head.

Want to know a secret that most of the professional reborn artists use to open their dolls’ noses? It’s warming the head up before creating the holes. If you have a convection oven, preheat it to about 260-270 degrees Fahrenheit. While you’re waiting for it to heat up, place some paper towels out on a cookie sheet and lay your doll’s head down on top of it. The paper towels are just there as a precautionary measure to prevent any grime from the cookie sheet from caking onto your doll. Trust me, you don’t want this to happen! When the oven is preheated, stick the cookie sheet with your doll’s head in and let it heat up for about 6 minutes before taking it out.

Note: You can use a hair dryer on a high-heat setting to warm your doll’s head up if you don’t have a convection oven. It’s not as effective and take a bit more work, but it’s still better than working on your doll at room temperature. Just run turn the hairdryer on the highest heat setting possible and slowly move it around your doll’s head, specifically targeting the nostrils.

https://youtu.be/3if_EhG1fAE
Immediately after taking your doll out of the convection oven (or using the hairdryer), take a small-sized drill bit and gently poke it through the center of one of the nostrils. The size of the drill bit really depends on how large of an opening you desire. Some reborners like a small and subtle nose opening, while others prefer a more prominent one. Personally, I like a medium-sized opening using drill bit somewhere between a US size #10-30 (10 is larger).

Once you poke the drill bit through one of the nostrils, take it out and immediately poke it through the other while it’s still soft and warm from being in the oven. Make sure the drill bit goes all the way through and then slowly twist and turn it to create a smooth opening. This is necessary to help remove any torn vinyl that may linger from the original opening. Just twist and turn the bit back and forth for 2-3 minutes, pull it out, and then repeat the procedure on the other nostril. A common mistake made by beginners trying to open their reborn doll’s nostrils is not placing anything inside them after they create the holes. It may not seem like a big deal, but the holes may close up once your doll cools off. When this occurs, you’ll be taken back to square one and forced to re-open the nostrils. So, how are you supposed to prevent this from happening? I’ve found that placing some chopsticks in the nose right after creating the holes is a quick and easy way to keep them open. Sure, your reborn doll will undoubtedly look silly with huge chopsticks sticking out of their nose, but it’s a quick and easy way to keep the nostrils open until your doll sets.

It shouldn’t take too long for the nostrils to set and harden back up. Depending on the material of your doll and how long you placed it in the oven for, you can expect the nose to harden in about 15-25 minutes. Once it feels stern with no real give, take the chopsticks out and reassemble the head back on your reborn doll’s body. 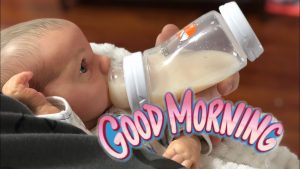 Am I Ready To Adopt My First Reborn Doll? How to wash & CARE for a Lifelike Reborn Baby Doll Selecting The Right Glue Type For a Reborn Baby Doll