It’s easy to write a one dimensional villain. They are evil for evil reasons for the sole purpose of being evil. However, the best villains are the ones with more than one dimension and motivations beyond just being evil. Often, a way to add dimensions is to explain their back story and why their motivations are what they are. An event in their past? Their twisted upbringing? Loss of a lover? All good villains should have a tragic back story, because that is what pushes real people to occasionally do bad things that they view as the right things. 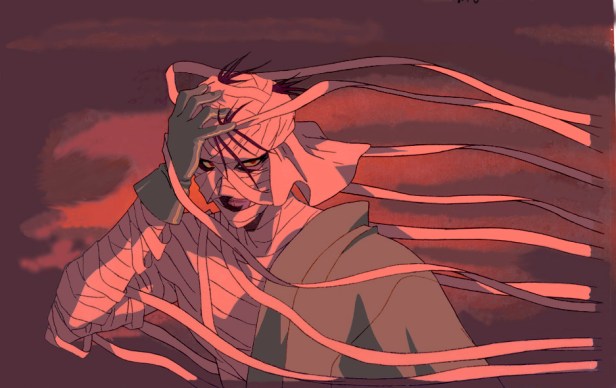 Like many of the villains from Kenshin, Shishio is a complicated character. After Kenshin stopped being an assassin, Shishio was the one that took his place. However, the party that utilized him later decided he wasn’t the idealistic servant that Kenshin was, but rather a sociopath that would do anything for power. So, naturally, they attempted to burn him alive. Well, it didn’t quite take. Yet, that doesn’t actually make him very sympathetic. In fact, the part that makes him tragic actually comes later when he begins to gather society’s misfits. Historically, it was difficult for some samurai and other members of Japanese society to adapt to the changing Meiji era and increasing Western influences. As such, Shishio took in those who couldn’t quite adapt. It is a soft side for someone who is often so focused on vengeance. Yet, because he was so focused on revenge, of course the government just couldn’t leave him alone and he eventually loses everything. Zeref has done some truly evil things and at first he seems somewhat one dimensional in his villainy, but that’s not so. His tragic story, like many tragic stories, comes from his background. Initially he was cursed by Ankhseram for trying to bring his little brother back from the dead. As a curse of contradiction, as long as he values life, everything around him will die. Furthermore, his suffering is eternal because of his immortality. Yet, one day, he finds Mavis, a woman similarly cursed.

They fell in love, but because their curses mean they can never be happy, when they kiss, she dies despite her immortality. That was his breaking point, and the last thread that snapped him. There are no heroes in Future Diary, they are all just villains against each other and each the hero in their own eyes for the sake of survival. However, even following Yukiteru, it is clear that Yuno is villainous, even towards him at times. Of course, she wasn’t always that way. She was twisted severely by her abusive parents and further twisted by having to play that killing game before. If you twist a person enough, they break. Not many of the villains in Akame ga Kill are sympathetic ones, or even very deep as characters. However, Esdeath is a particularly interesting case for villainy in any show. Certainly villains have been enamored with heroes in other anime series, but none showed quite as much affection as she does towards Tatsumi. Yet, while you can feel sympathy for how tragically the anime ends for Esdeath and Tatsumi, her previous upbringing is somewhat sad as well.

She was raised in a social Darwinist tribe where they believe only the strong survive. When that entire tribe was killed, save for her, this only cemented this attitude. Yet, she takes it to extremes probably because of her budding insanity.

Esdeath’s particular brand of crazy could never be cured, but you can still feel sorry for her. 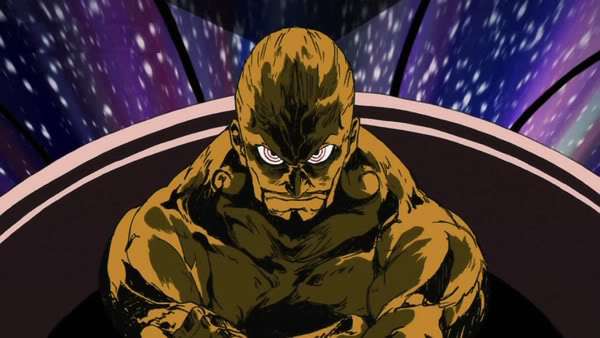 Ah, nothing is more wonderful than a fallen hero, and the fallen hero Lordgenome is fun case. You see, much of Gurren Lagann is about passion. The louder you scream, the more determination you feel, the more power is at your disposal. Lordgenome was once the Kamina of his time, full of passion and fight, but what we see on screen is a man whose passion burned out.

After countless years of war, and the losses that come with that, he broke. He gave up and decided that instead of leading humanity against the Anti-Spirals in war, he would suppress them and force them underground for their own survival. This, in the audience’s eye, paints him initially as the villain of the series, but that’s not quite true. Crona doesn’t look very much like a villain, so when you see him/her, you think “yeah, they’re probably going to be a good person at some point.” And while that comes to pass, Crona actually ends up being a bit of a flip-flopper on that sort of morality. Yet, you can understand how it comes to pass. Their mother raised them to be twisted by being forced to kill and torture. Furthermore, their weapon is a constant malicious voice in their ear tempting them to do bad.

There are some who insist that Griffith did nothing wrong, and his line of thinking is pretty easy to follow. He was always painted as a great leader and a man of endless ambition. However, all it takes is one wrong decision of princess sex and he is brought low, to a point of lowness where his ambition will never be realized. When you will never walk, speak, look, or lead like you once did, anyone would make his choice to sacrifice his entire organization to regain all that. All his ligaments were cut, his tongue was cut out, and he was tortured and starved to the point of being a living skeleton, his decision was both tragic and understandable. FMA, both versions of it, are riddled with complicated and tragic villains, but none so much as Scar. As a show following two alchemists, naturally the Alchemist Killer Scar should be pretty villainous, but it is so much more complicated than that. While he unleashes fury on State Alchemists, you still see a kind side of the man he used to be. His people were systematically murder by State Alchemists, and vengeance became his purpose. However, you still see kindness, particularly to people who act for their own families, since he, himself lost everyone dear to him.

Do you know any more sympathetic villains in anime? Let us know in the comments section below.

15 Anime Where The Protagonist Is Actually Underpowered