Adapted from a manga of the same title
Produced by: Madhouse
Genres: Action, Comedy, Parody, Supernatural
Number of episodes: 12
Summary:
Everything about Saitama screams “average”, from his lifeless expression, to his bald head, to his unimpressive physique. However, this average-looking fellow doesn’t have your average problem… He’s actually a superhero that’s looking for tough opponents! The problem is, every time he finds a promising candidate he beats the snot out of them in one punch. Can Saitama finally find an evil villain strong enough to challenge him? Follow Saitama through his hilarious romps as he searches for new bad guys to challenge! Note: As a person, I am inherently easily amused (provided its within my tastes in comedy). Please read the rest with that thought in mind.

As a parody series, don’t expect a tight story from One Punch Man. Just as it should be, many things are set up based on convenience. Mostly, the setting of the series, which takes place in a cluster of cities where villains and monsters pop up like weeds and humans are forever going into hiding. There is literally nothing about it that makes sense – from the constant stream of villains to the self-fixing road in front of Saitama’s house – and the only reasoning I can give is that, it’s just that kind of series. If you’re the type of person to fault a parody series for having no logic, then let me discourage you from watching this series right now. If you’re still here, though, let me tell you why exactly I love it. Compared to series that are funny because they are self-aware, One Punch Man is funny because it is not. It has every Shounen/Supernatural trope imaginable in it, but it doesn’t poke too much fun at it. It would be easy to insert obvious japes about the constant monster appearances or tragic back stories of heroes and villains. But instead, it passes off as a natural part of their universe, and subsequently, the characters all take it seriously as well.

That’s why it works so well. In a world that is already filled to the brim with crazy and illogical things, comes a character that just blows it out of the park. Someone, that even by this world’s standards, is an oddity. What’s even better, is that the man himself has a pretty normal personality. Nonchalant, actually, compared to all the other ‘fired up’ characters. That contrast that Saitama presents just by existing is not only the centerpiece of this series’ comedy, but also the core of the series itself. Of course, comedy alone can’t carry a series. Contrary to my presumptions, this series actually has a semblance of a story that is (thank heavens) non-cyclical in nature. [Minor spoiler alert] It explores a bit about Saitama’s frustration towards defeating his opponents in one punch, how the Hero Association in their world works, etc.[Spoiler end] Granted, it’s not a heavily developed ‘story’, but it’s enough to keep things fresh. Something like the story in Gekkan Shoujo Nozaki-kun.

The only thing I could fault this series for is its pacing. Understandably, Saitama cannot be in every battle scene because he would end it instantly. But without his presence, the show basically reverts to a trope-laden Superhero series. I can’t completely hate it because it’s necessary, but the way it’s played out is sometimes too slow. It also means a lot less when I know for certain that it’s game over the minute he arrives on the scene. Saitama is your typical OP character, minus the powers of friendship/love,  the overwhelming “justice must be served” attitude, and the recognition and respect from everyone. Huh, no wonder I like him. He’s completely free of tropes, and now that I think about it, the complete opposite of Genos. *shipping intensifies*

Ehem, as mentioned earlier, it’s his uniqueness as a main character in such a trope-laden world that makes this series funny. In battles, where regular people would worry about life and death, Saitama is worrying about – I kid you not – groceries and laundry. He is no way your traditional superhero, but there is something lovable about his almost slacker-like attitude and occasional diligence in hero duties. Despite how blur he seems to appear, there are also moments in the series where he shows true understanding of the situation and reacts intelligently. I wouldn’t say that there’s proper development for him, though, and it’s not something you can expect within 12 episodes of a comedy anime anyway. As for the other characters, only two others really caught my eye – Genos and Sonic. Both of which could probably carry their own shows. Genos is diligent, has a strong craving for justice, and a tragic backstory; everything you’d want in a Shounen hero. Sonic, on the other hand, is the crazy anti-hero who disdains Heroes and loves fighting with strong opponents. I could definitely see these two characters having great character arcs later in the series, but unfortunately, the anime ended too early to tell. At least there’s the manga!

Madhouse did a great job with bringing this series to life. From its comedic moments to its action scenes, I couldn’t have imagined it any better. The action scenes especially were amazing to watch, mainly because they weren’t lazy about it. They even animated the monsters’ deaths realistically, which would have taken quite a bit of time. I’m talking exploding guts, raining body pieces and buckets of blood. Not quite enough to be flagged for gore, though.

As for the audio, the OP is so fitting to the series and I’ve had it stuck in my head since. The rest of the BGM is fitting, but not outstanding enough for me to mention. Are you not overly critical? Do you love comedy? Then you should give One Punch Man a shot! In my opinion, this popular parody series would sit well with lovers of most genres and even first time anime watchers. It has great grasp on its comedy style, has great animation, and a lovable set of main characters. My only criticism is some problems with pacing in certain episodes, but I’ve been thoroughly entertained otherwise. 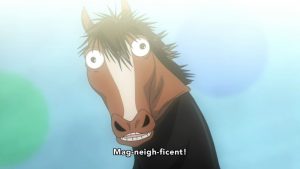