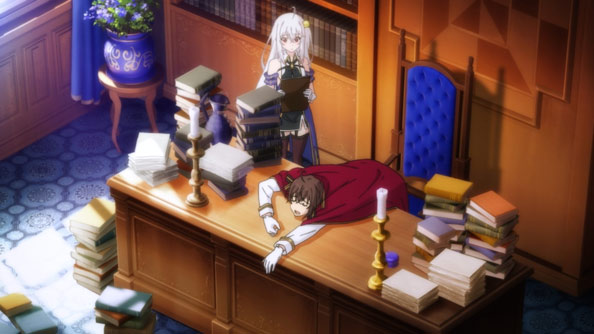 Despite the obnoxiously-long title, this is not an isekai, but a comedy that happens to take place in a renaissance-level fantasy world. In it the Empire of Earthwold lords over many lesser kingdoms, including Natra, presently led by Prince Wein, whose father the king is ill. The thing is, Wein doesn’t wanna rule Natra, which is in dire financial straits.

He wants to make it just attractive enough to sell to a greater power, then begin the retirement stage of his life. He’s lazy, and wants to take the nearest shortcut, but he’s hampered throughout this episode by another quality he possesses: tactical and strategic genius. Yes, while he acts petulant goof in front of his personal aide Ninym (and no one else), Wein is in fact too smart for his own good, and enjoys the fierce loyalty and admiration of his older military advisors, who would no doubt change their tune if they knew the jerk was planning to sell their kingdom!

But that threat of being found out doesn’t really factor into this first outing. Rather, Wein plays the role others aks him to play, rallying the troops and coming up with a plan to fend off the army of a neighboring kingdom. Again, he doesn’t wanna, but he’s backed into a corner. As such, he gives a rousing speech to the toops and executes the battle plan, which works out far better than he was expecting. Part of that is due to his agreement with the Empire to train Natra’s royal forces, once again potentially shooting himself in the foot.

But when the enemy’s general charges his camp, Wein and his aides retreat, goading the enemy into giving chase right into a canyon trap, where Ninym and a force of archers mow the enemy down, cementing Natra’s victory. It’s here where the brutality of war and the quirky comedy clash the most. Once back at the strategy table with his military advisors, whom Wein knows want to invade their now-vulnerable neighbor, he tries to propose a plan far too preposterous for them to accept…only for them to accept it immediately and assume he’d seen the plans they’d already made.

Prince Wein’s inner voice has a chibi avatar who does all of his internal, genuine reactions while maintaining his princely façade. But if it’s money he wants to put his kingdom in a better position to be sold, invading a gold mine is probably a net-profit proposition. Genius Prince isn’t going to win any awards with its production values, but other than some muddy-blob-looking armies and quite a bit of still-shots with streaking white lines indication action, it’s an inoffensively adequate-looking affair. The comedy is similarly unimpressively competent.

Mostly, should I continue this show I shall look forward watching Wein’s interesting friend/confidant relationship with Ninym, who stays by his side despite his shenanigans, as well as watching him continue to succeed despite trying to fail. It’s Machiavelli-meets-Bialystock!