Young man in Southern California has a degree, and also a very clear opinion on who Love Live!’s best girl is. I didn’t attend my college graduation ceremony. My school has separate ceremonies for each department, but all of my friends in the business administration department were a year older than me, while all my friends who were graduating at the same time as I was had different majors. So rather than go to the ceremony by myself, I skipped it. 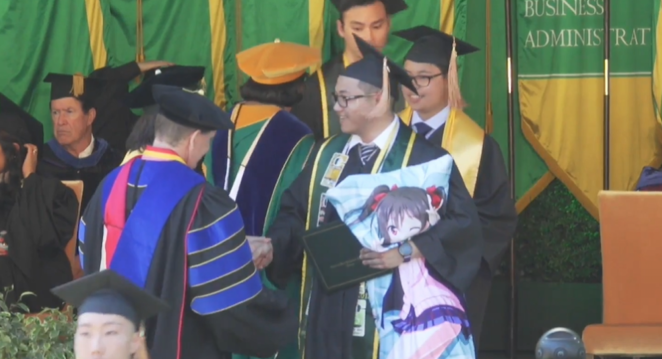 But in retrospect, I probably should have gone. It would have been a nice memory, and my parents would have liked to take some pictures. Plus, even if I didn’t have any pals receiving their diplomas at the same ceremony, I wouldn’t have had to walk across the stage alone to pick up mine, as proven by a recent graduate of the exact same university I attended.

Twitter user @honkposter was watching a livestream of the commencement ceremony for Cal Poly Pomona’s College of Business Administration’s class of 2018. The entire affair clocks in at nearly two and a half hours long, and is pretty much a standard graduation ceremony: names being called out one after another, with some graduates doing little dances as they put a period on their student days. But midway through the salute to graduating accounting majors, something unexpected happens, as Ryan-Nghai Thai enters from the left edge of the frame… I’m watching a livesteam of one of the commencements right now and this dude brought his fucking Niko daki pic.twitter.com/KWB6ksAHVW

Specifically, that’s Nico Yazawa, one of the members of Love Live!’s original idol group, μ’s, gracing Thai’s pillow. While there’s a smattering of giggles as the huggy pillow comes into full view of the audience, Thai himself looks perfectly at ease as he confidently strides forward to receive his diploma and congratulatory handshake. He’s also all smiles as he walks off, with his otakuism having survived his transition into adult life. With all the unpleasant stories recently involving Love Livers (as hard-core Love Live! fans are known), it’s nice to see a fan involved in something as wholesome and socially responsible as earning a bachelor’s degree.

So congratulations, Ryan! From one anime-loving Cal Poly Pomona alumni to another, don’t ever let anyone make you feel bad for being an otaku, because one day all that passion for Japanese pop culture just might change your life.