Back in October of last year, plans were revealed for followups to the Laid-Back Camp anime in the form of a second season, movie, and a short anime called Heya Camp△ (Room Camp). Now we have some more information for some of the projects, including staff and a January 2020 start for Heya Camp, as well as a new Yurucamp Series visual.

Masato Jinbo, who previously helmed the OP for the first season of Laid-Back Camp, will be directing Heya Camp at anime studio C-Station. Script writer Mutsumi Ito is on series composition, with Mutsumi Sasaki back as character designer and chief animation director. Director of the previous series, Yoshiaki Kyougoku, is now serving as supervisor. 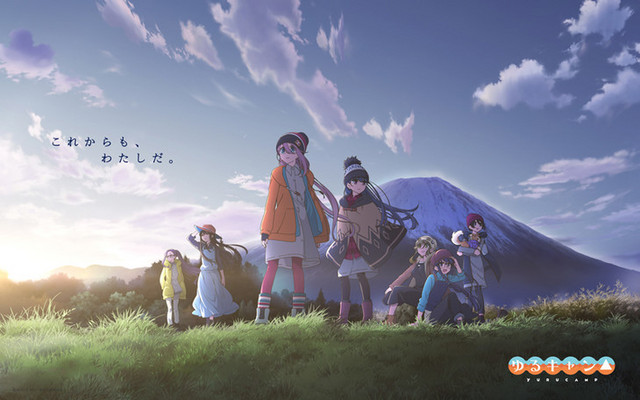 The Laid-Back Camp anime is based on the manga by Afro,

Nadeshiko, a high school student who had moved from Shizuoka to Yamanashi, decides to see the famous, 1000 yen-bill-featured Mount Fuji. Even though she manages to bike all the way to Motosu, she’s forced to turn back because of worsening weather. Unable to set her eyes on her goal, she faints partway to her destination. When she wakes up, it’s night, in a place she’s never been before, with no way of knowing how to get home. Nadeshiko is saved when she encounters Rin, a girl who is out camping by herself. This outdoorsy girls story begins with this first encounter between Nadeshiko and Rin.